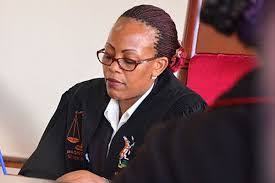 The newly promoted Chief Magistrate of Utilities and Wildlife Court at Buganda Road, Gladys Kamasanyu was on Saturday attacked by unknown people.

Kamasanyu was attacked outside Green Hill Academy in Namuwongo at 11.00am, while she was going to pick her child’s PLE results.

“Kamasanyu was rushed to the medical facility and she is steadily improving at International Hospital Kampala”. The Spokesperson of the Judiciary Jameson Karemani explained that

According to Owoyesigyire, the thugs stole her property which includes a phone and her bag. Owoyesigyire, adds that investigations into the matter have since commenced.

“She parked her car and later crossed the road to go to the schools. As she was heading out, three men who were on motorcycles and had allegedly followed her started beating her and she fell on the ground.
In 2019, she was also attacked by the supporters of Dr Stella Nyanzi in court and hit her with a bottle after she found Nyanzi guilty of offensive communication.

Kamasanyu, also being the head of the only Specialized Wildlife Court in Africa has presided over several cases involving suspects charged with offences related to illegal possession of wildlife species.