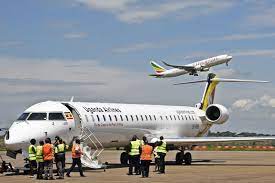 Last week, Uganda got yet another embarrassment when the Uganda Airline plane got stranded at Julius Nyerere International Airport in Dar es Salaam due to lack of fuel leaving passengers stranded for hours.

This incident follows sacking of the top management of Uganda airlines three months ago on allegations of corruption & mismanagement!

It also follows the sacking of Junior minister for Transport Monica Azuba and appointing one Byamukama Fred in the recent “recycling” sorry reshuffle by Gen Museveni!

These scandals or blunders come less than two years since this national carrier was revived after spending decades in limbo.

This is on top of losses amounting to 15 billion that the airline faced in 2018/19 and another loss of 102 billion in 2019/20 as unearthed in the Auditor Generals report released this year!

One would have hoped that by the time the airline was revived, there was feasibility studies made to ensure that when it becomes operational it would not only compete in business but also would outsmart it’s competitors for it would have picked lessons from them!

So running out of fuel was a blunder that dents the public relations of the airline moreover in such a time when information travels faster than lightening! It also casts doubt on the safety of it’s clients.

But this is a reflection of a country run and managed like a kiosk for lack of better words to use. With no professionalism at all; boda boda cyclists form majority in causuality wards in Mulago Hospital because they respect no rule, taxi stouts abuse and bark at their clients, a President declares that he is not serving the population but rather serving his family while government spokespersons lie with a smile on their faces!

It’s this “boda boda” mentality that the people running public affairs often display in course of their duties! That’s why the President doesn’t have any remorse declaring his ministers as fishermen and women!

If you want to see a messed up place visit any landing site on Uganda’s water bodies, whether on a small water body like L.George or a larger one like L. Victoria, the landing sites are a total mess.

Garbage including polythene papers and plastics are thrown in lakes, people defecate live in these waters because they lack toilets, yet majority drink this water from these same lakes untreated and in the end dirrhoea, cholera or typhoid are common diseases. But even with that mess, the fishermen live a happiest life of enjoying themselves and as a result HIV prevelence on our landing sites is the highest in the country!

So these poor fishermen do not even recognize their poor conditions, they see everything okay, they look as satisfied as our Minister for information Dr Chris Baryomunsi whenever he is speaking on TV!

So the shabby nature of our landing sites clearly describes the manner in which Museveni’s fishermen will run our country in the next five years! If you are a doubting Thomas, a simple look at the mess in distribution of the relief money dupped “Nabanja money” will prove you wrong!

Therefore in Uganda all abnormal things are justified, the Airline managers will continue to enjoy the comfort of their air conditioned offices, their incompetence not withstanding! Not even a public apology will be made because our country is run just like that; no principles, no values, no rules, no culture, no morals, no ethics, no basics, no standards, no discpline, no character, nothing totally!

Just recently in United Kingdom a health Minister Matt Hancock resigned after he was caught kissing an aidie which was against social distancing rules. Here in Uganda the Minister of Heath Hon Dr Acheng was seen holding a massive political rally without putting on a mask and she was not only elected to Parliament by the population but also was retained as a Health Minister. The population is as careless as their leaders!

First Lady Janet Museveni’s cousin Alice Kaboyo who was charged and convicted of corruption after pleading guilty in court for dipping her long hands in state coffers when she was a Presidential aidie, surprisingly was recently appointed a minister and even approved by Parliament!

Am told the appointments committee even subjected her appointment to a vote and majority voted in her favor! MPs voting on such a matter was as stupid as moslems debating on whether to eat fried pork or a boiled one!

How could MPs unless they are possessed by demons vote on whether a certified thief should be given another opportunity to steal more money or not?

But because our Parliament is part of a larger rotten system, thus being a garbage in garbage out thing, everything will pass through as long as Museveni is interested!

So the mess and recent embarrassment by Uganda airline is simply a reflection of how rotten our systems are, the same mess starts from state house to the local councils after all a fish rots from the head!