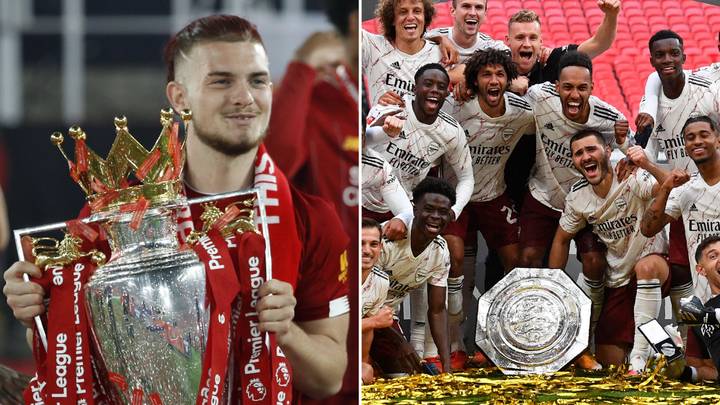 Arsenal won the trophy on Saturday afternoon with a 5-4 win on penalties after a 1-1 draw in normal time.

The Gunners players celebrated on the pitch emphatically but Elliott didn’t seem too bothered by his side’s loss.

Elliott, who was an unused substitute in the game, stated on Instagram Live: “I’m not worried bro McDonald’s trophy anyway.”

He then added “six Champions Leagues,” in reference to Liverpool’s European haul.

Fans have reacted to the 17-year-old’s outburst and his sly dig at Arsenal.

Arsenal took the lead at Wembley through Pierre-Emerick Aubameyang.

Bukayo Saka beautifully switched play to the left wing to pick out Aubameyang, who controlled the ball before firing it past a helpless Alisson.

Both sides tired as the game wore on and Liverpool got their equaliser through Takumi Minamino.

The 25-year-old netted his first goal for The Reds with a cool finish to take the game to a penalty shootout.

Arsenal scored all five of their spot kicks, while Rhian Brewster struck the bar.

The result means Jurgen Klopp’s side have lost their second Community Shield in two years.

What do you think of Harvey Elliott’s reaction to Liverpool’s defeat?