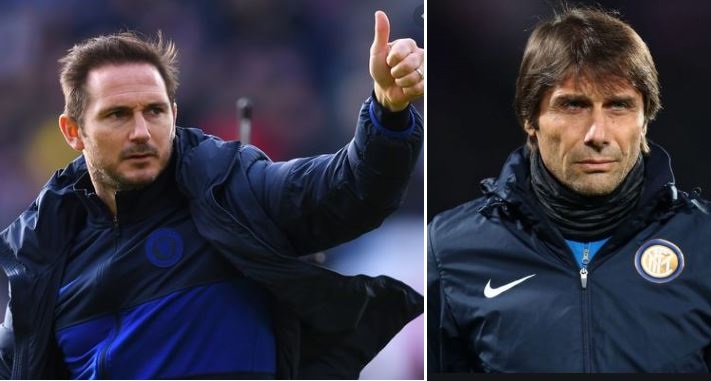 Antonio Conte has been impressed with the job Frank Lampard is doing at Stamford Bridge and say ‘He has the skills to become one of the best managers in the world’.

Lampard took the top job at Stamford Bridge last summer after just a year in management with Derby, who he led to the Championship play-off final.

The Blues were fourth in the Premier League table when football was shut down due to the Coronavirus crisis. They also had a Champions League last-16 leg against Bayern Munich and an FA Cup quarter-final away at Leicester to come.

Conte, who won the title in his first year as Chelsea boss in 2016-17, has been impressed with the job the inexperienced 41-year-old has done so far.

“I think he is doing a great job,” he told sky sports’ the football show.

Conte added that “His second experience after Derby County, to be a coach of a top team is not easy. He has the skills, the ability, to become one of the best managers in the world.”

Antonio Conte reveals how he would like Chelsea fans to remember him from his 2 seasons in charge..

“He has to continue to work in this way and I wish him the best for the future,” Conte noted.

After winning the league during his debut season in England, Conte was sacked a year later after falling out with the club’s board and striker Diego Costa.

Asked about the demands of being Chelsea’s manager and working under Roman Abramovich, the Italian warned Lampard that he must make winning a habit.

“I think generally to be the manager of a top club is not easy,” he said, adding that “When you are in a top club the demand is very high. You must win if you want to keep your job.”

He also revealed that “My experience in Chelsea was amazing and I have great memories of the relationship with the players, with the fans, with the club.

Chelsea is one of the best teams in England in the last 10, 15 years. They won a lot of trophies and it is normal when you arrive at such a club and the demand is very high. But it is like this at every top club.”