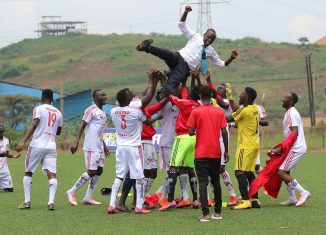 Kitara Football Club got promoted to the StarTimes Uganda Premier League for the season 2020-21.

This followed a well worked out 1-0 win against Kiboga Young during the final of the promotional play-offs played on Wednesday, 21st October 2020.

Striker Brian Muluuli Mayanja was the hero with a great header on 55 minutes after being assisted by team captain Maxwel Owachagui.

Mark Twinamatisko, head coach at Kitara saluted the character of his charges.

‘We played our hearts out and the players were all committed. I salute them in a special way’ Twinamatisko stated.