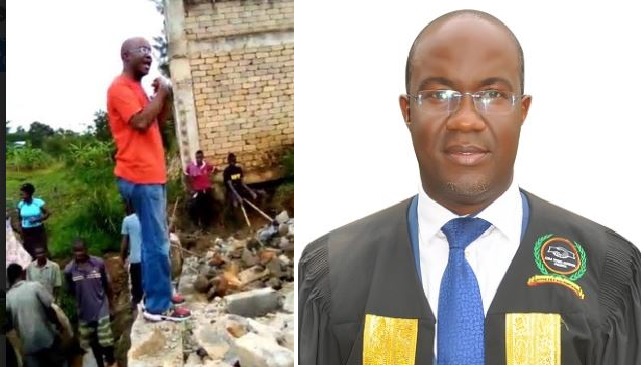 A city businessman has rushed to court to stop Kira Municipality officials from forcefully grabbing his land in a bid to open up an ‘illegal road’.

Harold B. Ssemalwadde, the Managing Director of Logistics Giant Globe Trotters Ltd, sought court redress after accusing the Municipal Council bosses led by Mayor Julius Mutebi, of allegedly orchestrating a plot to deprive him of his land through coercion and violence.

In his plaint filed through his lawyers of Barnabas DK Dyadi & Co. Advocates at the High Court Land Division in Kampala, Ssemalawadde wants court to direct the Kira Municipality officials to halt any attempts of illegally running a road through his land. This is on the grounds that on top of killing his business that employs hundreds of Ugandans, the road construction is fueled by behind-the-scenes corruption and influence-peddling that government has already stated to be the greatest enemy stifling economic growth in Uganda.

Details  Of the Wrangle

According to court documents seen by this publication, the current land row traces its roots to 2010, when, following exponential growth of his company, Ssemalwadde bought land measuring over 15 acres in Bbuto-Bweyogerere, intending to relocate the business which was by then situated in Kiwatule-Ntinda in Kampala district.

Later, he further expanded the initial plot by acquiring more neighbouring plots of the land situated at the border of Wakiso and Mukono districts. By that time, most of this land lay idle, with just a portion of it being used for clay mining and bricklaying as a well as vegetable growing in the swamp thereon.

And as a law abiding Ugandan investor, Ssemalwadde between 2012/13 approached Kira Municipality land office to process the requisite legal documentation for his land.

Particularly, Ssemalwadde presented his site plan. It clearly showed that off his land title he had curved a road meant to feed into his over 25 acres for his logistics business and wanted the authorities approve  it. And given the nature of his business, he ensured that the road that branched off the main Sonde-Bweyogerere road was wide enough and well tarmacked to ease movement of trucks, workers and clients to and from his business premises.

This was also done upon realization that the nearest main (Bbuto- Kiwanga) road was about a kilometer away yet it was the only one that was being used as a major access for all existing neighboring companies/businesses like the Kiwanga Poultry Farm and Kiwanga Thermal Power Plant.

Ssemalwadde explains that he opted to open his own road after experts assessed that because his business involved heavy trucks turning all the time, it was wise for him to have a separate road for them so as not to disrupt traffic flow on the marram road that was being used by his neighbours and the general public. Besides that, the Bbuto-Kiwanga road is situated in Mukono district while his business is situated in Kira Municipality, Wakiso district.

Ssemalwadde avers that to date the Kira Municipality bosses are yet to return his approved plan despite several pleas and meetings  with them over the same.

For instance, court records show that on September 19, 2016, Ssemalwadde wrote to the Kira Municipality Town Clerk complaining about lack of communication and feedback from the municipal council in respect to his plan.

Ssemalwadde further  averred that he suspected that the municipal bosses were biding time so as to be able to alert the former Kira Mayor and his business allies about Ssemalwadde’s project with the aim of playing along the powerful politician’s whims.

The suspicions were confirmed when to his dismay, he learnt through rumours that the municipal officers were intending to construct a motorized access road through his land without his consent or knowledge. As per their plan, the road would be an improvement of a footpath that connects to the gardens around his plot as well as to the drainage stream that separates Kiwanga in Mukono from Bbuto in Wakiso. Unfortunately, this same road would only be constructed by breaking his perimeter wall so as to join the new road to the tarmac road that he constructed for his business (trucks and clients).

Ssemalwadde says that after getting wind of the rumours he approached the municipal officials and complained about their move. He also highlighted to them the fact that the road through his company premises was unsafe to residents and his business as it exposed the former to accidents from turning trucks and the latter to theft of clients’ goods and general insecurity.

Initially, the two parties consented that the road was untenable given those circumstances. The municipal officials then suggested that he provides an alternative “footpath”.

Ssemalwadde says he did so by opening a footpath around his perimeter fence. He however admits that while the locals began using the new footpath, he did not block the old footpath through his land partly because he never wanted to tamper with the water table as advised by the environmental impact assessment report from NEMA.

Ssemalwadde says since then there has been harmony but trouble erupted afresh towards the end of March 2020 when, while observing the COVID-19 lockdown that saw him scale down on business at his company, his security guards summoned him to office. This was after they had observed that some strange people were rolling culverts at night and stationing them at the point of the stream where they wanted to open the road.

Ssemalwadde says he contacted the police but on March 29, 2020, all hell broke loose when a group of vandals stormed his company with Mayor Julius Mutebi and demolished part of his wall fence for the construction of the earlier said road.

According to CCTV footage before court, Mutebi, using seemingly populist rhetoric, told the locals to “break the fence as no one can scare you since council approved what you’re doing.”

Further footage shows that the mob action was prior planned as the goons on site had two cars that were delivering water to them as the vandalism happened.

A distraught Ssemalwadde sought police intervention that later came and arrested a few of the vandals including John Okou, Wycliff Mulinge and Robert Mulinge among others.

Later, in early April, Ssemalwadde sought a meeting with Mutebi and his council. In the meeting that took place at the Globe Trotters company premises, Mutebi shocked all and sundry when he admitted that whereas he was aware that there could have been some mistakes committed in vandalizing Ssemalwadde’s perimeter wall, his hands were tied by majority and populist demands from his “voters”.

“I’m a politician and so I must always be on the people’s side; it doesn’t matter whether you (Globe Trotters) are right or not,” Mutebi is quoted to have said in the meeting.

Corruption Cited In the Wrangle

However, independent investigations have shown, according to court records, that Ssemalwadde is a victim of influence-peddling occasioned on the Kira Municipality bosses by his neighbor only identified as Herbert.

It is claimed that Herbert owns an expansive chunk of land next to Globe Trotters and has since used his privilege as a personal friend and business associate of the former Kira Municipality mayor to disadvantage Ssemalwadde. Sources say that while the said land has only the Kiwanga-Bbuto road as the main access, its value and appeal will be elevated by an alternative road through Ssemalwadde’s company to the tarmac Bweyogerere-Sonde road.

This, it is suspected, is the invisible hand behind the current squabbles. It also explains why after years of tossing Ssemalwadde around in regard to his plan, the Kira municipal authorities rushed to open the road within a single day during the COVID-19 lockdown when companies had been advised to either close business or scale down operations.

It has also emerged that police investigations discovered that as opposed to using area security, the Kira officials hired two LDU personnel from Katosi to guard the illegal road digging that was done by a single tractor.

Ssemalwadde told court that following the standoff, his clients including SPEDAG logistics firm have withdrawn business from him. He says the withdrawal came after the vandals stormed one of the customers’ containers, vandalized it and robbed goods worth Shs450m.

“The said client was paying Shs15m daily but is now gone. Our business is being killed by mere populist politics yet it has been employing hundreds of vulnerable poor people within Bweyogerere and beyond. But we are now all grounded because our customers are fleeing from the chaos every single day. That is why I want the honorable court to come to my rescue,” Ssemalwadde avers in his affidavit. There have been claims that the contentious road has existed for over 30 years but Ssemalwadde says that is a lie that court can disprove with a single visit to the scene. The road is clearly a “COVID-19 project!” Ssemalwadde  contends.