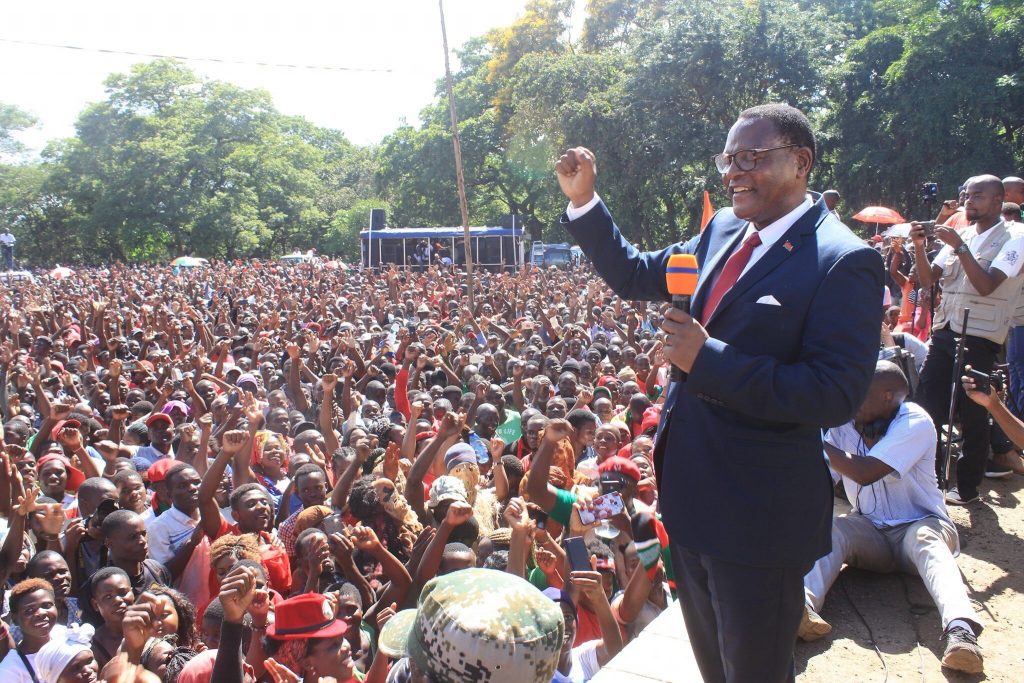 Yesterday, over 6 million registered  Malawians thronged in huge numbers to polling booths across the Country to re-elect the next President of Malawi marking and end to a full year political showdown between Government, Opposition and civil society.

The re- run of May 2019 Presidential election was ordered by Malawi Constitutional court in February 2020 after judges found widespread  irregularities with the original ballot.

The election saw the 80 year old President Prof. Peter Mutharika narrowly re-elected for the second term by less than 159,000 Votes with a 38.6% share of the votes cast against his erstwhile political nemesis the Malawi Congress Party (MCP) leader Lazarus Chakwera with 35.4% and President Mutharika’s Vice President Saulos Chilima came third with 20%.

Both Mr. Chakwera and Chilima petitioned court and argued that the election had not been free and fair. Their complaints included allegations that vote tallying forms had been added up incorrectly and tampered with using correction fluid – known in Malawi by its brand name Tipp-ex.

Uncertainty around the results sparked months of tension and protests which spilled over into clashes between opposition supporters and Police across the country. The February 2020 decision to annul the election led some to celebrate but Mr. Mutharika described it as a “serious subversion of justice which marked death of country’s democracy.”

The landmark verdict, which reverberated across African politics, made Malawi the second country South of Sahara to have Presidential poll results annulled after Kenya in 2017. Court ordered elections to be held within 150 days.

The new vote comes at a time of growing tension between the Government and the Country’s court following President Mutharika’s actions of sending on a forced leave of the chief Justice which was seen and challenged as an attack on the judiciary by the executive . It sparked off protests by lawyers and High court slapped an injunction on the Presidential directive.

Mr. Peter Mutharika, a former law Professor who taught in the US for over 30 years before becoming a Cabinet Minister, was first elected to Malawi’s top office in 2014 . Two years earlier his brother Bingu W’a Mutharika died while serving as President and was replaced by his Vice President Joyce Mujuru Banda.

In the two horse race, President Mutharika faces fierce competition from Mr. Lazarus Chakwera a former cleric who heads the main opposition Malawi Congress  Party (MCP) the Party of founding leader and former President Dr. Hastings Kamuzu Banda “the lion King of Malawi” who led Malawi to independence 1964- 1994. He lost in a democratically organized elections to Bakili Muluzi in 1994.

Born in Lilongwe to a subsistence farmer, the philosophy and theory graduate has pledged to raise the national minimum wage, create over a million jobs for the youth among others.

The 65year old Mr. Chakwera  is  also the candidate for the opposition Tonse Coalition. An alliance of over 9 opposition political parties that are backing his candidature and he also has the backing of former President Joyce Banda as well as the Country’s incumbent Vice President Saulos Chilima who is his running mate .

Mr. Saulos Chilima of the United Transformation Movement (UTM) who finished in third position in 2019 vote was once an ally of President Mutharika but has since fallen out with him.

The election re run is taking place amid the corona virus pandemic that has killed 11people and infected at least 730 in the country of 18 million people.

The Malawi Electoral commission (MEC) did complied to World Health Organization (WHO) ‘s standard operating procedures (Sop) by providing hand washing facilities with soap at each of the 5000 polling stations to guard against the spread of covid 19.

Voters were encouraged to bring their own face masks and queued two arms length apart.

Malawi’s Presidential re-run provides for a smokescreen of what a corona election should look like.

To our Ugandan setting which is gearing up for an impending general election, the Malawian election model provides for a best, basic and classical examples of how Uganda  can organize a perfect election amidst the corona pandemic. Malawi ‘s corona infected numbers are more less the same as those of Uganda. Malawi has lost over 11 people to Covid-19 and Uganda has lost none and Malawi has had a lively  campaign from both opposition and Government precipitated by pomp and fanfare that comes with an election campaign that makes supporters excited, crazy and energized.

Malawi going to polls isn’t an isolated case, it will rather not invent the wheel other countries have organised elections amidst corona; South Korea, Mali and Burundi. We haven’t heard mass Exodus of infection of corona owing to those countries organizing elections during corona times. Already countries like Tanzania will be going to polls in October 2020, Ghana and USA are expected to go to polls by November 2020.

In the countries mentioned above, I have not heard of such countries organizing the so called  scientific elections which the Kampala regime led by Mr. Yoweri Museveni has taken advantage of and thereby inventing an illegally organized election hiding under the guise of protecting Ugandans against Covid19. I view the reasons advanced by the regime to justify a scientific elections as baseless and wicked.

In the road map the Ugandan electoral commission published recently, it attempted to make and change laws, first forward, the mode of campaigns is well stipulated in the constitution its therefore inordinate for electoral commission to gives its self authority which isn’t under its mandate by drafting a road map and embroiled it with rules. The million dollar question is, under what legal mandate does Electoral commission have powers to regulate gatherings in campaigns???

If Electoral commission attempts to regulate and stop rallies hiding under guise of attempting to stop the spread of covid 19, it should look at down town Kikuubo in Kampala central business district where traders flock that area in thousands. Its a rally of its own imagine on a daily basis. If the regime can’t regulate people flocking kikuubo in thousands to do business, its then foolery to claim that rallies must be banned in campaigns.

The so called scientific elections being mooted by Electoral commission is devoid of a participatory working approach by all stakeholders as they were not consulted, no civic education to the voters. A road map and the entire election cycle must be all inclusive to voters and candidates.

The scientific elections road map lacks inclusivity the special interest groups like people with disabilities. elderly and the youth are not catered for in this arrangement.

The scientific election Suggest the digital campaigning mode as the only sanctioned avenue of reaching out to the voters on radios, TVs,news papers and social media .

To the People With Disabilities(PWDS) fraternity which constitute to over 4million people will be left behind. How will the deaf listen to radios from the candidate or voters???

Can the  blind people watch TVs? That means the deaf and the blind candidates won’t contest other than being voters yet they will have no opportunity of interfacing their would be leaders .

The fate of over 1million young people who registered but clocked 18   this year won’t be considered as voters hence their right to vote will be suspended. The young people majority of whom are unemployed won’t be able to campaign since they will not afford the exorbitant fees for the advert in the mainstream media.

We think the road map and scientific election is prohibitive and lack inclusivity as provided for in the constitution. Its inordinate to politicize science by NRM/ M7 as this so called scientific elections will only results into selection of leaders and the only beneficiary will be Mr. M7 as other candidates are not given platform to consult their voters.

We are currently under lockdown with curfew, there is limitation to movement of people, schools and public works are in recess. We now have two options; lift the lockdown, Electoral commission to go back and draft a new road map and organize a normal election where there are mass rallies or  We put elections to a recess, go to Parliament and make amendments to organize elections when normalcy returns.

The writer is the FDC National Youth League Chairman