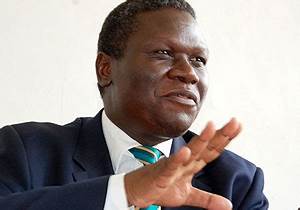 “This common wisdom fired me up. It led me to the current question, which I pose. Whose party is it anyway? Does DP belong to the top leadership, a section of the membership or does it belong to all the members, supporters and the nation, which looks to it to actualise their aspirations?”

The arrogance of these tribalists in Buganda who think they will own us and threaten our existence must be challenged.

Mao thanks for standing against “enkwe”

I watched and witnessed them conspire against you, not against your character but for your tribe.

I heard them describe you as being a product of a Munyakole mother and an Acholi dad and I realised we were dealing with a friend deadly reactionary and silly gang.

They have gone to their right place, Ku kasasiro stage in Kamokya.

They will rot there!

Uganda’s oldest party, the democratic party (DP), has a solid social base and a heroic historical mission. These withstanding, it has not been able to enjoy electoral success or the opportunity to govern since Uganda’s Independence in 1962.

Besides the hostile climate of tyranny that has thwarted the efforts of the party, there are also internal weaknesses in the party that must be diagnosed correctly and treated bearing in mind that you cannot treat cancer using Vaseline. Most of these weaknesses relate to the absence of an inspired and united leadership and membership to lead the mass crusade for the party’s noble ideals.

The DP must make itself capable of launching a political value for its values , which are indeed mainstream value cherished by Ugandans.

A ship that sails the oceans and rides the rough waves must have both a strong anchor and tough sails. In DP’S case it can be said that it has a solid anchor of values of principles and values, at the same time it cannot embark on its charted voyage to power because it lacks the sturdy sails of political strategy to tap the many winds.

I have observed that the party has lacked the will to seize the time and make its self the flag bearer for our national aspirations. I have watched as a dejected membership has drifted either apathy or pretty radicalism, I have watched as the party leadership has been co-opted into the anti-democratic schemes of the hegemonic NRM and its leader Gen.Yoweri Museveni..

I have watched as the twin vices of indiscipline and opportunitism have kept the party preoccupied with pretty squabbles as opposed to a focused march on the path to power.

I did not keep my frustrations to myself. I have discussed them at every available forum. I dare say mine was one of the voices that started calling out serious reforms in the party way back. But it has not received the required response from the leadership of the party. At one point I even toyed with idea of starting a new political party. But I felt I was running away from a good fight. I have to fight a good fight.

I recall that, in one meeting I had with young suppoters of the party who felt that instead of abandoning the party, I should play a greatrer role in reforming the party.

A young man told me that it was among the pygmies of Ituri Forest that one death in the homestead leads to the whole family abandoning the homestead.

He challenged not to abandon support for the DP just because of the current mishaps  apparent lack of direction.

This common wisdom fired me up. It led me the current question, which I pose. Whose party is it anyway? Does DP belong to the top leadership, a section of the membership or does it belong to all the members, supporters and the nation, which looks to it to actualise their aspirations?

DP belong to all of us who believe in its ideals, and anyone who seeks to make it the property of an oligarchical or sectarian clique is wrong and should be told so in no uncertain terms.

I am also convinced that the party now has a strong nucleus that seeks a rejuvenation of the party as a democratic, united, people’s party. Like I did in my first race for the party presidency in 2005, I still proclaim myself to be one of that number.

I proclaim myself to be a new democrat. There are many new democrats in Uganda who want to see a reformed, combat ready party and their time has come. As franklin Roosevelt once said “new conditions impose new requirements on government and those who conduct government.” Therefore, DP must renew itself. While its timeless anchor of values remains impregnable, it must make its sails capable of weathering hostile storms and riding strange winds that beset our voyage as a party.