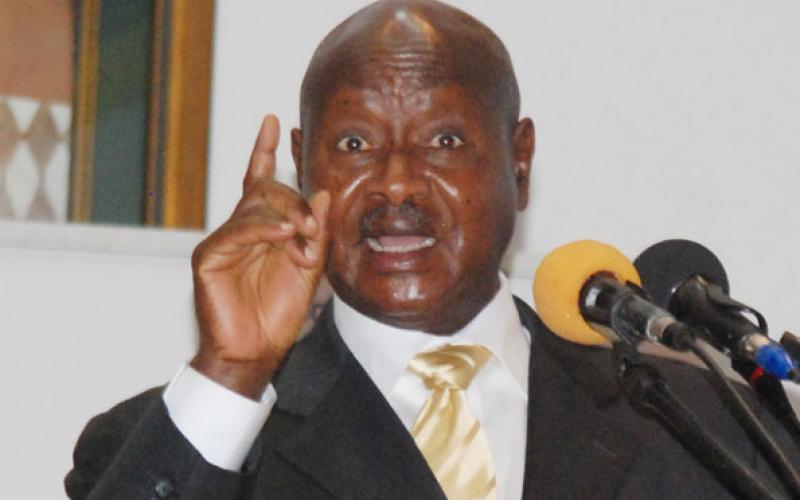 The NRM party has for long been confronting opposition political parties for criticizing its achievements.

Unlike Kizza Besigye who has given up on elective politics, focusing on his “Plan B”, Bobi Wine, POA, Mugisha Muntu, Henry Tumukunde, John Katumba, Nancy Kalembe, Norbert Mao, and others are all competing against president Museveni in the next presidential election.

Museveni, who has been a sole candidate for his NRM party for past elections (decades), wants to extend his rule to 40 years.

Bobi Wine, who was arrested last week on Wednesday in Luuka district after his arrival for a political campaign, on Friday, after his release from police detention by the Iganga Magistrate’s Court, told candidate Museveni: “We are not your slaves.”

For decades, opposition candidates (parties) have accused president Museveni of gross human rights violation, shrinking economy, and they have asked him to leave power.

As he seeks re-election, the NRM candidate is campaigning with the slogan “Securing Your Future”.

Meanwhile, Bobi Wine is using “A New Uganda” as his slogan and Henry Tumukunde with “It’s Possible”.

With all the above, and many complaints, NRM principal feels opposition will never appreciate many developments brought by the ruling party.

Presidential candidate Museveni on Monday took to Twitter and wrote:

“I feel embarrassed on behalf of the opposition. I was in Karamoja sub-region, opened a good hotel, commissioned the road from Soroti to Moroto, and the internet linking Moroto to New York by underground cable. I feel sorry people are there talking but not appreciating facts.”