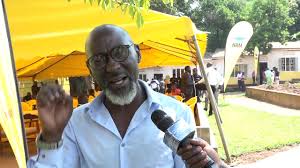 Isma was recorded making threatening comments to different members of opposition accusing them of wanting to deliberately promote hooliganism at the expense of state power.

“We shall not allow this hooliganism, we shall beat you, we shall knock you,” Isma rallied in the video in which he mentioned among others singers; Wycliff Tugume alias Ykee Bender and Alexander Bagonza alias A Pass.

However, a source inside the NRM says the party big wigs were not happy with Isma’s comments and therefore demanded he retracts the comments and issues an apology immediately.

According to Nile Post, the  the motor-mouthed blogger was yesterday forced to make a clear apology to the families of those who lost relatives in the riots as well as the artists he mentioned in the prior video.

“It was political tension, all sides were bringing fire, so in that mood, I said what I said. I have listened to them again and come to the conclusion some comments were not called for. I send my condolences to the families that lost loved ones,” Isma groveled.

Isma said he intended to tell artists A Pass and Ykee Bender to promote non-violence but the message could have gone off wrong.