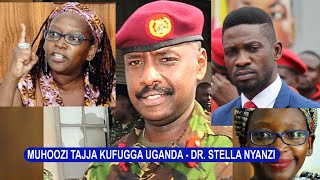 On the day of his arrest, Kakwenza Rukirabashaija went to his Facebook page and informed his followers and colleagues, among whom is human rights activist Stella Nyanzi, that he had been under house arrest by armed men who claimed to be policemen. Dr Stella Nyanzi says she is now willing to play the messiah and lay under the sheets for first son Muhoozi to ‘hammer’ her in an ecstatic missionary style in exchange for Kakwenza who she alleges was arrested because of his writings that criticized the first son to President Yoweri Museveni.

She wrote the poem below which she dubbed “Sex in exchange for Kakwenza” Hey Kainerugaba, my chubby Afande! Let me add some more ice cubes To your coconut-flavored waragi I will blow your fallen horn as you Gulp down your fiery drink So that it burns away their Lodged deep in your thick-ringed neck. That writer’s words smashed your cool!

(II). Hey Kainerugaba, my beefy afande! Lets go f*ck away missionary style your need to display raw power By sending brutish gun-men To breakdown the house of Kakwenza, Drag him off his laptop computer, Threaten to break his limbs, Shove him into a dark-glasses drone, And speed his terrified soul to God-knows- Where…

(III). Hey kainerugaba, my fatty afande! Let me suckle you obese man boobs And cool that hot plump flesh with my tears; Tears of pain at the silencing of a bold writer, Detaining him illegally a third time, Torturing him for his mischievous writing, Denying his lawyers access to his broken person Which Tweep will be next?

(IV). Hey kainerugaba, my drunk Afande!let me hold onto you thick hips And ride you like rabbits humping. Exchange my sex for Kakwenza’s freedom. Pay me neither cash nor position
I am unlike your other whores, In your drunken stupor from booze and power, give us the freedom to write – for we are writers!

(V). Hey Kainerugaba, my delusional Afande! You can f*ck as many orifices as you desire, But you will never f*ck with a writer’s will. Booze on as many substances as you admire, But you will never drink way writers’ freedoms. Daydream of taking over your father’s presidency,But you will never take over a creative’s creativity.
Go to the gym and go to rehab to cut down Your addictions to food, alcohol, sex and power
This is the second attack on the first family by Dr. Nyanzi the first one was on president Museveni and his wife, Nyanzi was arrested and charged for annoying the president.