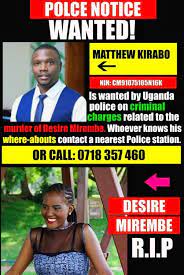 Mukono high court has concluded cross examination of two witnesses from the prosecution side in the mirembe case, the two key witnesses a Police officer and government analytical specialist Geofrey Onen who brought 25 exhibits and DNA evidence pinning Kirabo.

During a session at Mukono High Court, experts presented a DNA report pinning Mathew Kirabo, a former Makerere University student in the murder of his then girlfriend, Desire Mirembe. The investigating officer KMP Eliphazi Turyagyenda was tasked by Caleb Alaka to explain to court why he detained Matthew Kirabo to Nalufenya police a place known as a torture chamber yet the incident occurred in Buikwe.Mr. Musoke Emanuel, father to the deceased, expressed happiness towards the government analytical specialist who tendered in exhibits that were recovered from the suspect’s home and Mirembe including the underwear, sanitary pads.

“At least i’m happy with the evidence produced by Onen it clearly shows that Kirabo killed my daughter” Musoke said Defense Counsel, Evans Achenge objected to the evidence by the two witnesses from the prosecution side, citing the panga which was recovered from Matthew Kirabo’s Home. He said that any Ugandan can possess a weapon for self-defense.He continues to assert that his client Matthew Kirabo was subjected to torture while he was detained at Nalufenya

while gathering information from him that’s why he confessed that he killed Mirembe.
“We don’t believe in our client’s confession because the whole country knows Nalufenya as a torture chamber, he was subjected to torture.” Counsel Achenge said. Kirabo confessed to the gruesome act and was charged in the Jinja Magistrates Court with murder before being remanded. He was later granted bail on November 24, 2016 so that he can finalize his studies. Kirabo concluded his studies before securing a juicy job at Mulago Hospital.It should be noted that Mathew Kirabo’s family deployed Caleb Alaka and Evans Achenge making four defense Counsels including Charles Dalton Opwonya and Hassan Ali Kato.
Case adjourned to 11th January 2022 for further hearing.