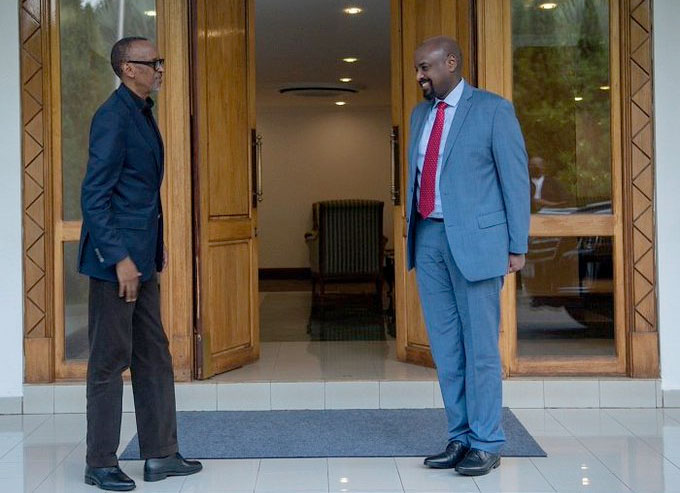 Rwandan government has, for several years, accused Uganda of wanting to cause regime change in Kigali, and arresting and detaining Rwandans arbitrarily.

Knowing African leaders, I don’t think that the case for Rwandans being arbitrarily arrested and detained is so important to Kigali – although it could be legitimate. The issue might be expressed by Rwandans just because it gives Kigali a high moral ground to call out Kampala.

But, is Kigali’s accusation against Uganda (of wanting to cause regime change in Kigali) true? Well, because of the nature of Uganda’s ambition against Rwanda, there’s no and perhaps there won’t be conclusive evidence that Kampala is interested in causing regime in Kigali. However, we can try to string dots together and see whether there could be some truth in the accusations.

Gerald Prunier, a French scholar, revealed in his book, Africa’s World War, that the late Sendashoga was planning a civil war in Rwanda in 1998 to change the status quo. Sendashoga reasoned that if his war was to succeed, he needed regional allies to prop him up.

Prunier reveals in the same book that: “Tanzania had agreed to host their ( Sendashoga and his military men) training camps but he (Sendashoga) wanted support from what he felt would be the most decisive and progressive force in the region, that is, the Yoweri Museveni regime in Uganda. He asked for my (Gerald Prunier) help in talking to Kampala and I arranged the necessary contacts…On Sunday May 3rd 1998, he met in Nairobi with Salim Saleh…and Saleh was open to the idea of helping a new moderate face enter the game.”

Two weeks later, on the evening of Saturday, May 16, 1998, Sendashonga was shot dead as he drove home. Andrew Mwenda, a Ugandan journalist, interviewed Saleh at that time and Saleh confirmed he had indeed met Sendashoga shortly before he was murdered.

Andrew didn’t reveal the details of the meeting Saleh had with Sendashonga but if Prunier’s words are to go by, we should then ask ourselves: Why was Uganda interested in supporting dissidents in Rwanda in 1998, when Pasteur Bizimungu was the president?

Certainly, I don’t think that Uganda was just being benevolent to Sendashoga and his sympathizers. There must have been selfish interests on the side of Uganda. Are those interests still existing even today?

Well, if accusations from the current Rwandan government are to go by, the sense is that interests to control politics in Rwanda by Uganda are still alive. Such a thing should provoke other questions in Ugandans and Rwandans: Do Kampala’s ambitions against Kigali reflect Museveni’s aspirations as an individual or that the ambitions will exist even when Museveni is replaced by another president in Uganda?

Are Kampala’s ambitions against Kagame as a person? If yes, why did Kampala have the same ambitions against Bizimungu in 1998 (assuming Saleh’s words in Prunier’s book are true)? If not, then is the need to cause regime change in Rwanda by Uganda a means for Uganda to her ends?

What are Uganda’s ends?

Anyway, if we are to make an attempt at peering into the future, will Uganda always have the capacity to pose an existential threat to any Rwandan state? Being that Uganda isn’t USA to disregard Rwanda’s sovereignty without serious consequences, it can’t directly and openly interfere with matters in Rwanda. It can only seek to control politics in Rwanda by supporting Rwandan dissidents: the Sendashogas (RIP), Karegeyas (RIP), Kayumbas etc.

The sense, therefore, is that if Rwanda always chooses to decisively deal with her dissidents that have the potential to cause civil wars or coups in Rwanda, Uganda or any other hostile neighbouring country may never have a better option to cultivate in order to control politics in Rwanda.

Unfortunately, the natural course of events is that the more the leader stays in power, the more dissidents against the same leader emerge. So, as Kagame continues to stay in power, we should expect more dissidents in number and sophistication to emerge.

If Uganda and other hostile neighbours continue to be relatively more stable and stronger ( politically, economically and militarily ) than Rwanda and interested in influencing Kigali politics, Rwandan dissidents to sponsor against Rwanda will always be there so long as Kagame is in power.

And, if Uganda’s ambitions against Kigali are ideological, then their implementation can only be postponed but not completely aborted.
Story credit: observer.ug