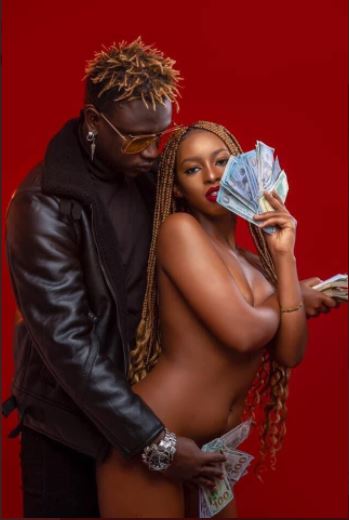 Popular Ugandan musician Gereson Wabuyi Gravity Omutujju is deep trouble for allegedly shooting a music video in which he was filmed posing with a naked girl.

According to some of the snapshots from the video set which have since gone viral on social media, Gravity is seen standing with a yet to be identified vixen, who is totally naked save for the dollars that they are both using to cover her nudity.

We have learnt from our sources within Gravity’s circles that he is yet to release the said very explicit  music video, whose title he is still keeping a secret.

As you read this, we have since established that a file on Gravity Omutujju is being prepared by Dr. Anne Kezaabu’s Anti-Pornographic Committee such that he can record a statement as to why he is resorting to pornography in a bid to seek relevance in the music industry.

This is because several celebrities, especially female celebrities especially musicians, models, actresses and others have in the past been accused of allegedly leaking their nudes and sex tapes in order to gain fame.