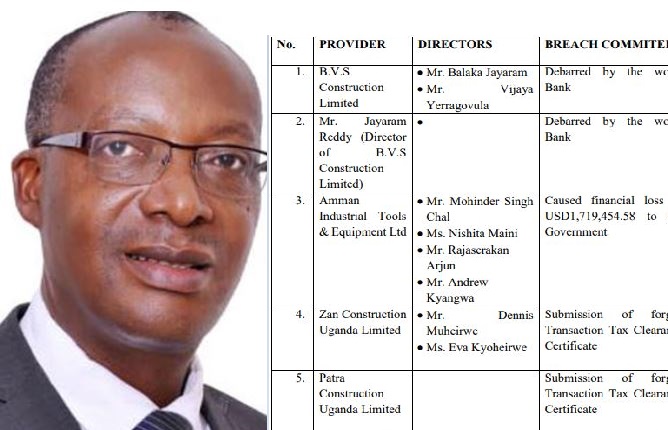 The government of Uganda, through the Public Procurement and Disposal of Public Assets (PPDA), has announced a list of over fifty companies that have since been suspended from supplying goods and services or being awarded contracts to undertake any works on behalf of the state.

According to Benson Turamye, the Executive Director PPDA, the Authority received recommendations from different Entities under Local and Central Government to suspend different companies from participating in public procurement and disposal of public assets proceedings for submitting various forged documents under several tenders.

The Authority investigated the matters and found that the firms breached the Code of Ethics of Providers.

Directors considered the recommendations and resolved to suspend the providers contained in the table below.

1. The above suspension applies to any successor in interest, which includes any Entity that is substantially similar to a suspended Entity or which employs or is associated with any

2. Under Regulation 12 (4) of the PPDA Regulations 2014, the suspension does not relieve the provider of responsibility or obligations under any existing contract placed prior to the suspension; and

In addition to the above, during the suspension period, all Procuring and Disposing Entities shall

1. Award contracts to the suspended companies;

2. Sell or issue solicitation documents to the suspended companies or in any way solicit bids

3. Enter into any other dealings or communication with the suspended companies except in respect to existing contracts placed prior to the suspension.

displayed on the Authority’s Notice Board and Website at www.ppda.go.ug.