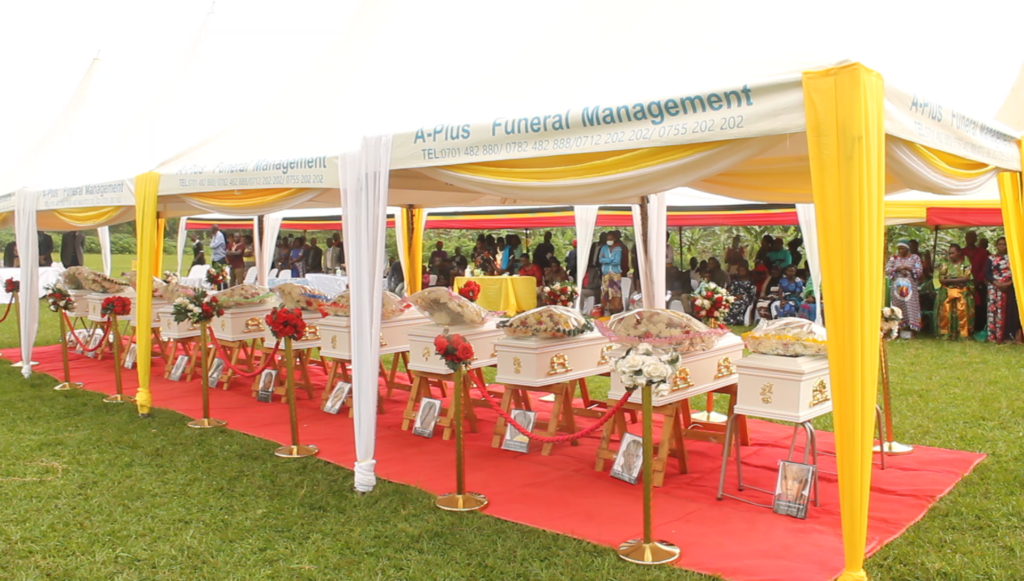 The government Uganda has today handed over SHS 5 million per parent while officially handing over the remains of eleven girls who died in a fire last week at Salama School for the Blind in Kisoga, Mukono district.

The burial was delayed for seven days because the children were burnt beyond recognition, and government had to first conduct DNA test before handing over the bodies to the parents.

It was moments of sorrow as a fleet of APLUS funeral management vehicles carrying bodies of the fallen 11 blind girls entered the premises of Salama School for the blind.

There was a mass of prayer for the souls of the deceased led by Fr. Paul Sebitoogo representing the Lugazi Diocese Bishop. Christopher Kakooza.

In his homily Fr. Sebitoogo condemned the heartless act committed against these innocent children, Fr. Ssebitoogo Condoled the families of the dead and commended them for being supportive to them unlike other parents who torture them.

Headmaster Francis Kinubi addressing the mourners apologized to the parents for what happened to their children saying it was not intentional but was done by cruel people that deserve to be cursed, but praised those who did their best to save the children during the fire especially the Kisoga Boda boda riders who drove the kids to the hospital

Sarah Bukosi Kigoli, the Commissioner for Special needs in the Ministry of Education, has lashed out at parents who still discriminate against children, especially those born with disabilities.

Sarah added that cabinet is soon tabling the law against with disabilities and this will help to punish parents and schools discriminating the disabled children.

The minister of state for Primary Education Joyce Moriku Kaducu, representing the Minister of Education, assured that the government will do everything possible to revive the school.

The government has also provided 1 million, a mattress, a Jerri can and buckets to all the sixteen fire survivors, and 5,000,000 has been given to the parents.