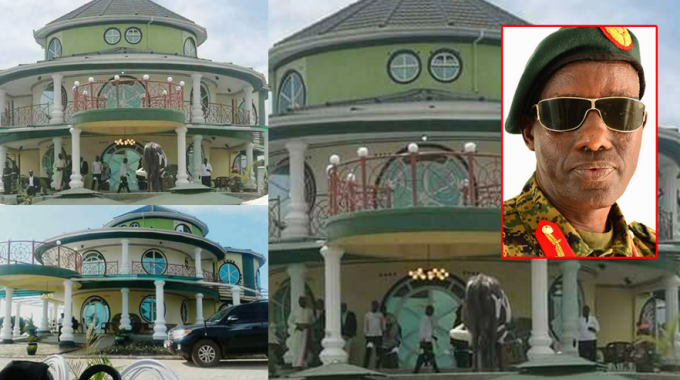 Gen. Tumwine, one of the tactically fierce commandos who apparently fired the first shot as Sevo and his trusted men moved to liberate this country in 1986, worked hard and served immaculately, so he had enjoyed the fruits of his sweat. Indeed, at the time of his death, he was sleeping like an emperor!
Eli Tumwine’s mansion.

The said state of the art palace is located in Rwemikoma in Kiruhura District. Unlike the usual cribs you may know, this house’s architectural plan and structure resembles a grass thatched house, but built in a modern way. Safe to say, Tumwine’s mansion is artistically created, something that emphasises his passion for art.

During the housewarming party, the singing General thanked God for everything he had done for him including guiding him through life’s challenges. He noted that he used his life savings to create a place to rest from the dusty streets of Kampala.

General Elly Tumwine was born on 12 April 1954 – 25 August 2022) was an Ugandan military officer, professional artist, and educator. He was the Security Minister in the Cabinet of Uganda, from March 2018 until 2021.He retired from active military service in July 2022.

General Elly Tumwine’s biograpy
Born; 12 April 1954 at Burunga, Mbarara District, Protectorate of Uganda died 25 August 2022 at the age of 68 at Agha Khan Hospital in Nairobi, Kenya
His education backgroung, He attended and graduated at Makerere University with a Bachelor of Arts in Fine Art, Diploma in Education and also attended Tanzania Military Academy for Officer Cadet Course, Uganda Senior Command and Staff College,

Tumwine’s military time.
Tumwine served as commander of the National Resistance Army from 1984 to 1987. He was one of the highest-ranking members of the Ugandan military who said it was okay for police to shoot at violent (have reached a certain level of violence) protesters (who attacked police, blocked public roads with burning tyres, looted shops, tribally attacked fellow civilians).

He also ordered the military illegally incarcerate and send opposition members to be tried in military courts based on trumped up charges (no examples given), which resulted in Bobi Wine supporters suing for Human Rights violations. This led the United States of America to sanction the Ugandan generals over human rights abuses. He was a member of the Ugandan Parliament, representing the Uganda People’s Defence Force (UPDF).