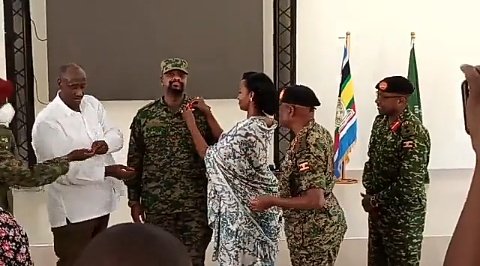 First son Muhoozi Kainerugaba has officially been piped as a four-star general of the Uganda People’s Defence Force (UPDF).
The now general of the UPDF was pipped by the national coordinator of the Operation Wealth Creation, Gen Salim Saleh and his wife Charlotte Muhoozi at the Bombo Military Barracks. Saleh is Muhoozi’s uncle.
At the same ceremony, the newly appointed UPDF commander of land forces Lt Gen Kayanja Muhanga was pipped by Saleh and his wife, before being officially handed office.
Muhoozi was sacked as the commander land forces by his father, also commander in chief, President Museveni last week following a series of tweets in which the first son threatened to wage war on neighbouring Kenya.
The president however promoted Muhoozi to full general whereas Muhanga was promoted from the rank of Major General to Lieutenant General.