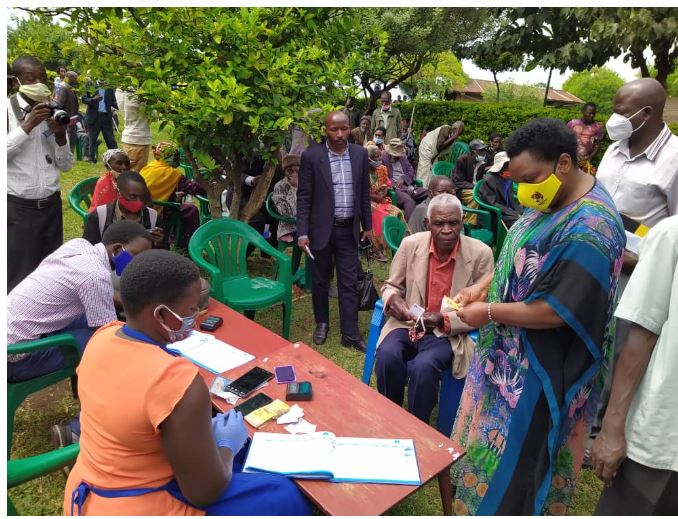 The elderly people in Uganda are already reaping  the fruits of the National Resistance Movement (NRM) government  after the Ministry of Gender, Labour and Social Development (MGLSD) rolled out the Social Assistance and Empowerment Grant) also know as SAGE program.

Under this program, the government of Uganda is giving out money to elderly people in all districts of the country, as one ways to help them cope up with life, especially during this period of the COVID-19 lockdown.

As such, officials from the Gender Ministry under the guidance of Minister Frank Tumwebaze, have since been going around the country, launching the SAGE program in each district.

It is for that reason that Hon. Peace Mutuuzo, who is also the Woman Member of Bunyangabu District, today officially launched the SAGE program segment for Bunyangabu district.

The program which originally started in five districts, has since been rolled out in other districts, with an objective of benefitting elderly people aged 80 years and above.

In Bunyangabu District alone, an estimated 2500 people will benefit from the SAGE program

Minister Mutuuzo revealed that in Bunyangabu, all the accredited beneficiaries will receive money for six months starting from the month of January 2020- to June, which will total to Shs150,000.

Hon.Mutuuzo said that; “The elderly in Bunyangabu District who qualify should watch out for the days when their specific sub-counties will receive money, so as to avoid being duped or cheated by people they registered as their next of kin.”

James Ategeka Mugarama, who is the   Bunyangabu District LC V Chairperson, thanked the elderly people for being patient  and waiting  for the program to be rolled out  in their district.

The Ministry of Gender, Labour and Social Development was represented by Prosper Mucunguzi, urged locals not to forge years and other documents but to that they submit information that corresponds with that which the National Identification and Registration Authority (NIRA) has in their data base.