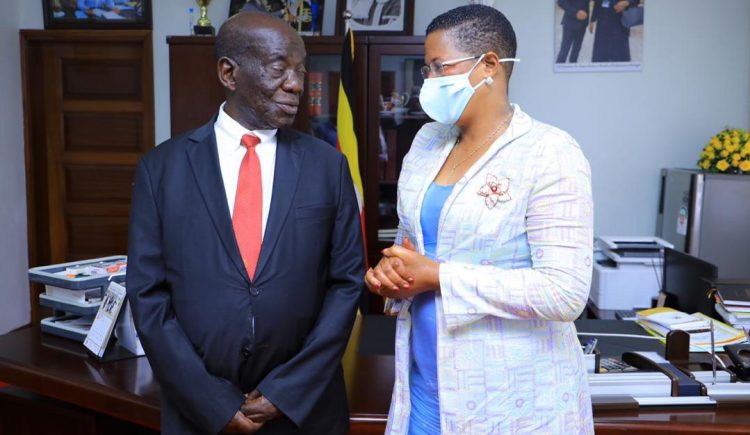 The former Vice President, Edward Ssekandi has commended the Speaker of Parliament Anita Among for uniting MPs in the 12th Parliament.
Ssekandi made the comments on Monday afternoon while meeting Speaker Among at her office.
The former Vice President said he was impressed with the way Among has managed business in the house ever since she was elected Speaker.
‘’I am pleased with how you have managed to unite MPs to deliver on their mandate and I will continue supporting and praying for you,” Ssekandi said.
Speaker Among thanked Ssekandi for finding time to pass by her chambers.
She also commended him for maintaining a close relationship with Parliament and for his continued wise counsel to the leadership.
“I was honoured by a courtesy call from our elder, mentor, and former VP His Excellency Ssekandi in my office. I always value his wise counsel and appreciate his confidence in our leadership.” Among said.
Ssekandi served as the eighth vice president of Uganda from May 2011 until June 2021.
Before that, he served as Deputy Speaker of Parliament from 1996 until 2001 when he was elected the Speaker, a position he held until 2011 when he was replaced by Rebecca Kadaga.
He also also served as the MP for Bukoto County Central constituency from 1996 until 2021.