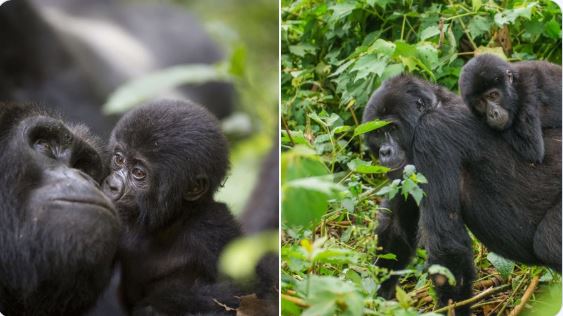 This has increased the family membership to 18 taking the tally of new births to 5 in just six weeks.

The Uganda Wildlife Authority [UWA] confirmed on Monday that The Rushegura gorilla family, welcomed yet another baby gorilla to mother Ruterana.

This has increased the family membership to 18 taking the tally of new births to 5 in just six weeks. The birth marks Ruterana’s third offspring.

18-year-old Ruterana was born on 1 January 2002. As she approached 12 years old,
Ruterana gave birth to her first offspring on 13 September 2012 but sadly the first offspring succumbed to Pneumonia while only a fortnight old.

However, this did not retard Ruterana’s unstoppable resolve to procreation and on 10 May 2016, she gave birth to her second offspring, a vibrant juvenile female named Rushokye.

Four other latest births of Rushokye occurred to adult females Kibande of the same Rushegura family on Thursday, 27 August 2020, one to a yet to be named adult female of Busigye.

There are more than one thousand mountain gorillas in the whole world. Uganda holds close to half of their total population, and the majority of them live in Bwindi Impenetrable Forest, whereas the others are found in Mgahinga Gorilla Park, however these at times cross over to Rwanda.

Guerilla trekking is the most popular tourism activity at Bwindi Impenetrable Forest.

In order to have a successful gorilla trek in Uganda, one has to prepare very well so that on the real trekking day, all is in order.

Gorilla trekking in Uganda include trekking for long in the forest looking for mountain gorillas.

However, Guerilla trekking at Bwindi is also associated with challenges such as steep sloping hills of Bwindi Impenetrable National Park mainly in the southern part, raining during gorilla trek, thick vegetation in the forest and probably when allocated a gorilla family that is moving fast.

Therefore, to avoid challenges faced during gorilla trekking in Uganda, one needs to prepare for both short and long treks such that he/she is not caught by surprise.

There have been no Gorilla Trekking Security Incidents in Uganda during the past 20 years because of the presence of the military.

Along with the Military, there is the Presence of Armed Rangers who protect tourists.

One of the safest places to be in Uganda is on a Gorilla Trek in either Bwindi Impenetrable Park or Mgahinga Gorilla Park.