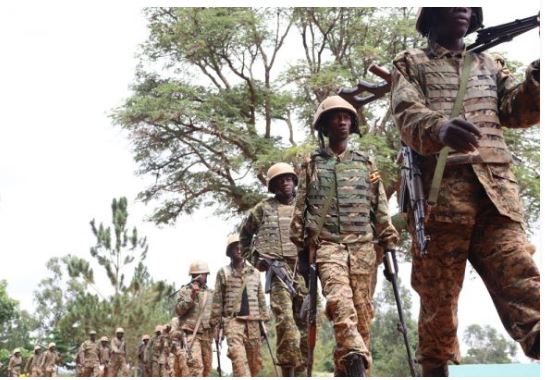 There is concern among the armed forces that the deadly Coronavirus (COVID-19) could ravage the Uganda Peoples Defence Forces (UPDF), after 9 soldiers were quarantined in Somalia on Thursday.

Sources reveal that the 9 soldiers who are part of the UPDF contingent in Somalia serving under AMSOM (African Mission for Somalia),   were put into isolation after coming into contact with a confirmed case who is in Mogadishu.

On Wednesday evening, UPDF confirmed a soldier attached to the African Union Mission to Somalia (AMISOM) had tested positive COVID-19 and was undergoing treatment.

The UPDF said that the confirmed case, a soldier who first manifested flu and cough signs, is now very stable and those with whom he got contact, are isolated.

However, according to the Deputy Spokesperson of the UPDF Lt Col Deo Akiiki, measures are in place at their bases to control the spread of the virus.

Lt Col Akiiki said that Taskforces on base camp and the Forward Operating Bases (FOBs) have been constituted to help mitigate the spread of COVID-19 among members of the armed forces.

“Hand wash points have been installed in base camp and forward operating bases. All shops and bases except banks have been closed, while the base camp where the UPDF main base is, is under total lockdown for two weeks,” Akiiki said.

He added that disinfectants, hand sanitizers and face masks have been distributed, and an isolation facility at LII Firld/Hospital has been designated to take care of any cases.

It should be noted that Somalia has so far registered 601 cases of COVID-19, 28 deaths and 31 recoveries.

Meanwhile, information from the Ministry of Health indicates that Uganda so far has 85 COVID-19 cases after they registered two new case on Thursday.

According to the Ministry of Health; “The confirmed cases are: a 35 y/o Kenyan male truck driver who arrived via Busia border. Our tracking system shows that he returned to Kenya.  The Second is a Ugandan male from Masindi District, who was confirmed from the rapid assessment survey.”