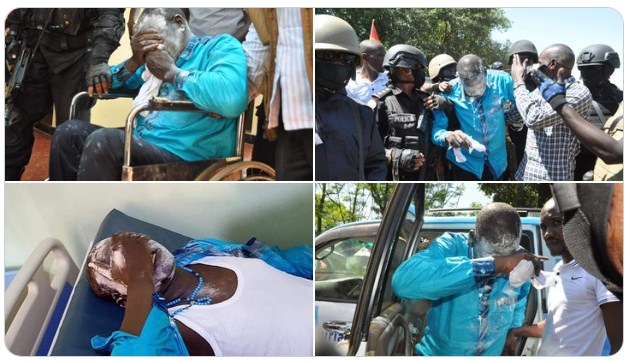 Filled with alot of fear that he is going to go blind, FDC Party president Patrick Oboi Amuriat has been rushed to hospital after being sprayed with a deadly powdered chemical in the eyes by the Police in Tororo.

His convoy was first blocked at Muwayo, the border point between Bugiri and Busia.

Amuriat covers his face He is currently admitted at Fastline Medical center in Bugiri town.

This Man Only known as Asiimwe Abraham has sprayed an unknown chemical at Patrick Amuriat Oboi,” the party said in a statement. This came after his arrest in Kamuli yesterday while trying to enter Jinja district. He was later dumped at Ssezibwa bridge in Kayunga district by security personnel.