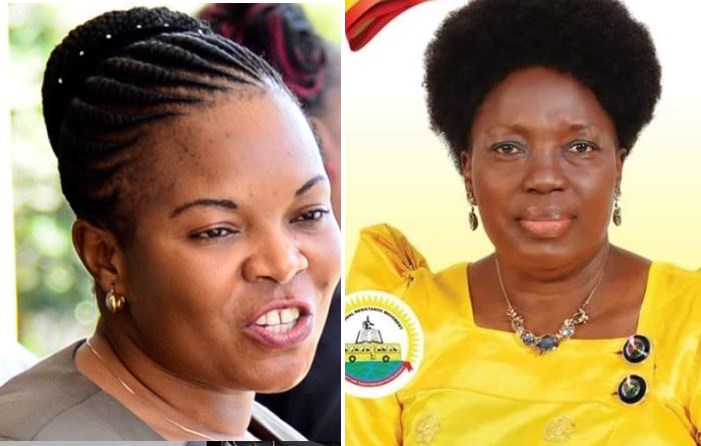 A bitter competition is raging on between Speaker Rebecca Kadaga and Minister for Persis Namuganza, for the 2nd National Resistance Movement (NRM)  Vice Chairperson seat.

We have established that Speaker Kadaga on Wednesday turned down the move by NRM CEC to force Namuganza to stand down for her.

Our Moles reveal that the NRM Chairman President Museveni had decided to talk to Namuganza to leave the race but Kadaga said there is no need for that, because she is assured of 70% victory and that ‘small fish’ like Namuganza might not even get 10%.

However, political pundits intimate that Namuganza’s candidature is a direct importation of village hatred or beef from Busoga to the national politics.

It all started when Namuganza disagreed with the Busoga kingdom Kyabazinga choice of Wilberforce Gabula Nadiope and blamed Kadaga for defending the choice of the people of Busoga in electing Nadiope.

Ever since then, the two powerful female politcians from Busoga regions have often publicly clashed and had not kind words for each other, something that seems to be tearing up the NRM ranks.

Namuganza is a Ugandan politician and the state minister for lands in the Cabinet of Uganda. She was appointed to that position on 6 June 2016.

Namuganza concurrently serves as the elected representative of Bukono County, in Namutumba District, in the 10th Parliament (2016–2021).

The rift became more conspicuous in 2018 when Kadaga along with Busoga King Gabula Nadiope installed Christopher Mutyaba as a chief of Bukono, where Namuganza hails from without her knowledge.

According to Namuganza, before passing, the former chief of the area, had named another heir to the throne, hence she blamed Kadaga and the Kyabazinga of disobeying the deceased’s last wish and that was when public spat between them started.