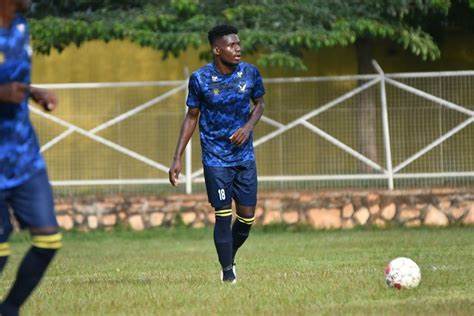 Express FC have settled for new signing Enock Walusimbi as their new captain for the upcoming campaign.

In a statement on their official website, the club said: “The club through head coach Wasswa Bbosa has named versatile defender Enock Walusimbi as the new club captain.

“The centre back who recently joined the Red Eagles on a two-year deal has been skipper before at Bright Stars and his former side will be tasked with providing exemplary leadership skills to his teammates.”

Coach Bbosa also revealed why the technical bench had arrived at the decision to appoint the defender as the captain for the 2020-21 Ugandan Premier League (UPL) season.

“Enock [Walusimbi] has been a captain everywhere, he’s played a feat that speaks volumes about his leadership qualities. The technical team, therefore, felt the need to select him,” explained Bbosa.

“Lucio” will be deputised by goalkeeper Mathias Muwanga and youngster Desmond Kaneene as the third choice captain. The latter captained the junior team and was promoted to the senior team at the start of last season.”

In a recent interview, Bbosa explained the reasons why he decided to sign Walusimbi.

“I have always kept an eye on Enock [Walusimbi] and those that know him can agree with me that he brings a lot to us,” Bbosa told the club’s official website.

“His game intelligence and leadership qualities are next to none.”

On signing for the team, Walusimbi said: “I am grateful for the opportunity to become an Express player, this club has a lot of history so much so that I’ve always wanted to be part of it.”

The 22-year-old has also featured for regional sides Nansana and Luweero United but it’s his time at Solito Bright Stars where he stood out, marshalling the backline for three seasons as well as captaining the side.

Most notably “Lucio” guided the Buganda Province Region to the 2019 Fufa Drum, scoring one goal in the process

ove on from Liverpool defeat with Netherlands

His arrival was seen as a huge boost to coach Bbosa’s backline, as they will try to avoid a repeat of last season where the club leaked in over 35 goals.

The six-time league winners and record-equaling Uganda Cup winners are focused on claiming a seventh league title next season.