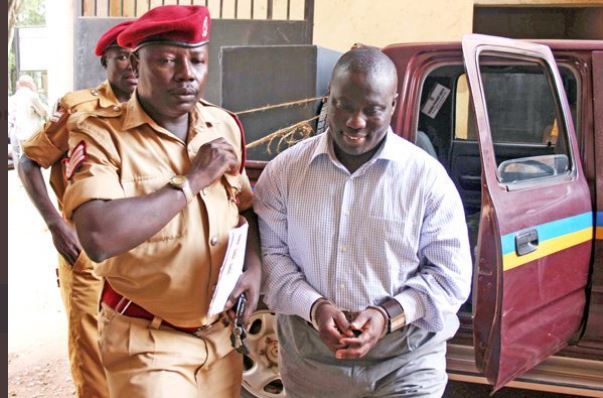 Geoffrey Kazinda, the former Principal Accountant of Office of the Prime Minister (OPM) has been sentenced by the Anti-Corruption court to 15 years in prison on three counts of forgery, illicit wealth, and financial loss to government.

Kazinda, who was a few months ago freed from jail, after serving  8, years at Luzira Prisons  following his conviction on several charges of corruption, is set to return to jail following his recent conviction.

Besides being convicted over forgery, illicit enrichment and causing financial loss to government, Kazinda was also found guilty of living a life beyond his means.

Kazinda’s troubles started in 2012 when he was arrested and paraded before the Anti-Corruption Court in Kololo, where he was charged with abuse of office, fraudulent false accounting and one count of causing financial loss.

He was also charged with 26 counts of forgery and conspiracy to commit a felony.

However, on Friday, Justice Margaret Tibulya of the same court, convicted and sentenced Kazinda to 15 years in jail after he was found guilty of having rented Constellation Suites in Nakasero and apartments in Kampala for ten months at a cost of Shs210m, had a house and land at Kyadondo, Mengo West valued at Shs3.1Bn, cars including BMW, Mercedes Benz ML Class and Dodge saloon cars all valued at Shs769m and diverting over Shs20Bn government funds, on top of living a life way beyond his salary.

Following his conviction, the state prosecutor had asked the court to confiscate Kazinda’s property to serve as a lesson to other public servants who would want to engage in similar crimes that cause suffering to citizens in terms of lack of services like roads, hospitals and schools.

However, in mitigation, Kazinda told court that having served eight years in prison over almost similar offences, his property should be saved as he has two kids and an 80-year-old mother to look after.

Kazinda also asked court to let him walk free since he has spent eight years in Luzira over almost similar charges.

However, Justice Tibulya ruled that court cannot let such criminals enjoy fruits of their deeds and ordered the property confiscated.

“Courts cannot allow convicts enjoy fruits of their conduct and allowing them retain proceeds of their crime would be unfair. At such a time when the country is struggling to pay debts over such people, a custodial sentence is inevitable.”

Folloqing the ruling, Justice Tibulya directed that Kazinda’s house and land at Kyadondo, Mengo West and all cars including BMW, Mercedes Benz ML class, Dodge and other properties be confiscated by the  government to recover part of the loss suffered by the state due to his criminal acts.