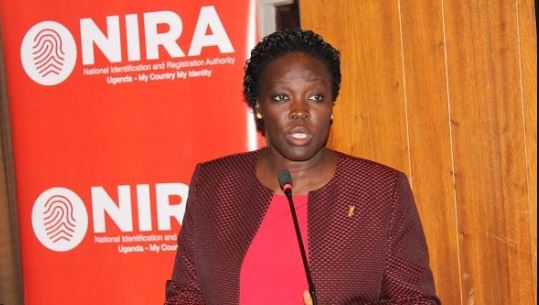 The days of city lawyer Judy Obitre Gama as the Executive Director of the National Identification and Registration Authority (NIRA) are numbered, after President Yoweri Museveni fired her  and ordered Internal Affairs Minister Gen. Jeje Odong to look for somebody who is more qualified for the job.

But President Museveni will not have her contract renewed and in a May 18th, 2020 letter to minister Odong, Museveni directs that a new executive director with legal and information technology background be identified to head the authority.

Gama’s reign has been dogged with several issues of corruption, nepotism, poor performance and incompetence, allegations in the issuance and replacement of identity cards. Some people who applied for IDs 3-4 years ago have not received them.

“I have been informed that the contract of the current executive director is due to expire. Given the problems faced by NIRA especially relating to the issuance of national identity cards, there is need to identify a new executive director, preferably with legal or information technology background,” Museveni said in his letter to Odong.

In 2018, the auditor general said NIRA had failed to account for over Shs8.4Bn – including Shs2.1Bn paid out to individual personal accounts and another Shs1.3Bn which was deposited to the personal account of the accountant.

NIRA was also accused of flouting procurement procedures during the exercise that was carried out in primary and secondary schools across the country during the national ID student’s enrollment exercise.

The Auditor General’s office said NIRA had caused government a loss of Shs2.7Bn after purchasing overpriced 2,000 laptops and 6,000 laptop batteries yet only 350 batteries were delivered.

Parliament’s defense committee led then by Judith Nabakooba (now Information and National Guidance minister) in 2018 handed Gama to the Criminal Investigations Department for investigations after failing to provide evidence of the use of government resources, although the case file later went cold.

According to the committee, the authority didn’t have documents and records in relation to their activities and operations. NIRA didn’t have authentic paperwork showing what they are doing and the executive director was accused of using her position to recruit staff without approval from Public Service.

NIRA failed to avail minutes of board meetings for the first two years, which MPs said is unacceptable for an authority which is managing Uganda’s data system.

In February this year, Museveni appointed a new board for NIRA led by James Biribonwa, a former commissioner at Electoral Commission to help push the authority to be effective. Biribonwa then tasked the authority management to explain the detailed process of national ID replacement and explain why it takes longer.

Gama, 50, is an academic who previously served as a lecturer at Makerere University law school and several boards, including that of Uganda Registration Services Bureau, and Bank of Uganda.