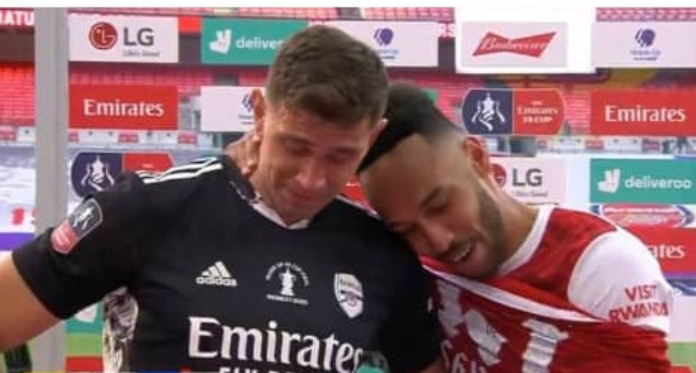 Emiliano Martinez couldn’t hold back his tears as he celebrated winning the FA Cup with Arsenal, 10 years after leaving Argentina to join the club as a teenager.

The Gunners beat Chelsea 2-1 on Saturday evening to secure their 14th FA Cup trophy, with Pierre-Emerick Aubameyang the hero on the day.

However Martinez has been a great feel good story for the north London side, since getting the chance as regular first choice goalkeeper at the Emirates for the first time in a decade at the club, following Bernd Leno’s injury after clashing with Neal Maupay in the game against Brighton in June.

After the match the keeper, who could do nothing about Christian Pulisic’s opener, was interviewed with Aubameyang and couldn’t hold back the tears

The 27-year-old was also spotted after the celebrations, and collecting his winner’s medal, on Facetime with his family and he was once again very emotional.

Martinez left Independiente aged just 16-years-old 10 years ago, to join Arsenal’s youth team. In a decade with the club he has spent time on loan at Oxford United, Sheffield Wednesday, Rotherham United, Wolves, Getafe and Reading.

He had only made 14 appearances for the club in eight seasons in the first team before this season, as the other goalkeepers had been signed and sold as first choice and back-up in that time.

However the injury to Leno has seen him become first choice in the past two months and he has been in excellent form for Mikel Arteta’s side as he’s racked up 22 appearances in all competitions this season.

When he was 17, Martínez left his family & moved to England to try help his loved ones out of poverty.

He had to wait almost a decade for his chance, but he never said a word out of place.

Emi Martinez in tears. The man has been at Arsenal for 10 years, lives and breathes the club. If there’s one player that deserves this moment, it is him pic.twitter.com/GRLCqv3igc

Martinez in tears in BBC interview. He spoke so beautifully and passionately about his decade-long road to today earlier this week. Arsenal have a great man in him.

Emi Martinez is one of the main reasons we’ve won it. He’s been unplayable since stepping up. Well done @emimartinezz1!

“I had seen my dad crying late at night because he could not pay the bills. I remember the day that me and my brother ate and not my mum and dad.”