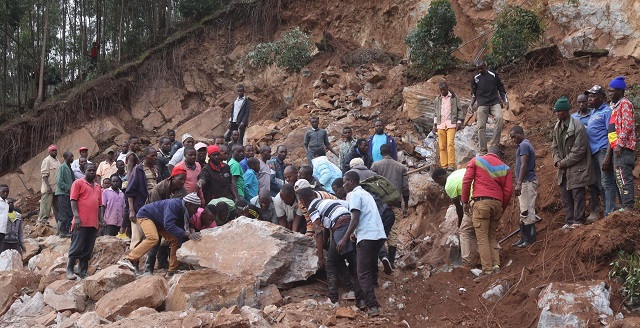 A 27-year-old man in Rubanda district was buried alive in a quarry where he was mining stones for economic survival after it caved in on Wednesday afternoon.

The deceased has been identified as Dan Muhereza, a resident of Murambo II village, Kitojo ward, Bubaare town council. Muhereza met his demise on Wednesday afternoon at around 04:00pm while quarrying stones in Haruhasha village, Bushuura ward, Hamuhambo town council.

Bandebaho says that the stone quarry belongs to Obed Natukunda, a businessman in Hamuhambo trading centre. He says that the victim was working as a casual laborer.

According to Bandebaho, the victim’s two children who were also at the same quarry managed to run away and survived unhurt.

Charles Bernad Buturooha and Wilson Mugisha, uncles to the deceased say that the victim had spent more than a year quarrying stones in the same quarry for survival. They now want authorities to suspend operations of the quarry since it is a threat to lives. They also say that despite such a tragedy, it is difficult for locals to quit stone quarrying because it is a viable source of livelihood.

By 7:00pm, police and locals gave up on using spades and hoes to remove the hard cores and soil from the quarry. District authorities also failed to get an excavator and only managed to improvise with a wheel loader. By press time, the wheel loader was still at work trying to remove the soils and hardcore to find the victim.