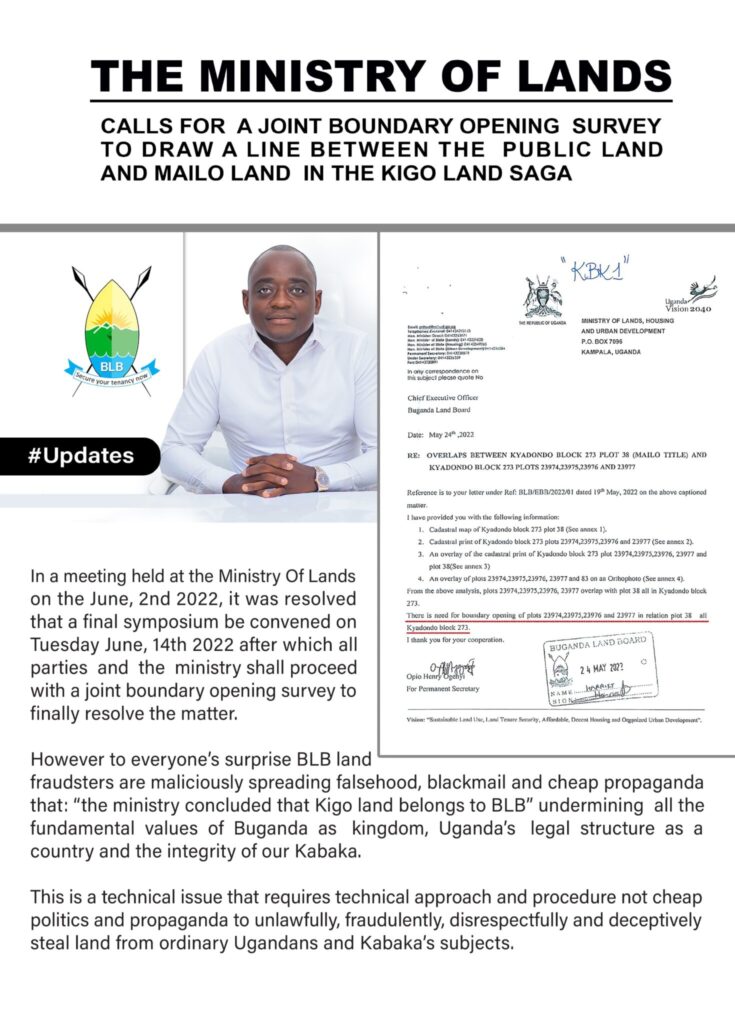 The Ministry of Lands, Housing and Urban Development has called for a joint boundary opening survey between Kiham Limited and Buganda Land Board to draw line between public and mailo land.

This was resolved in a meeting held at the Ministry of Lands on June, 2nd 2022 which resolved that a final symposium be convened on Tuesday, June, 14th 2022 after which all parties and the ministry shall proceed with a joint boundary opening survey to finally resolve the matter.
In a letter dated May 24, a copy of which this website has seen, Mr. Opio Henry Ogenyi, the Principal Land Management Officer directed the Chairperson of the BLB to issue boundaries.
“There is a need for boundary opening of plots 23974,23975,23976 and 23977 in relation to plot 38 all Kyadondo block 273. I thank you for your cooperation,” reads part of the letter.

This, therefore, pours water on Buganda Land Board’s reports spreading that: “the ministry concluded that Kigo land belongs to BLB” undermines all the fundamental values of Buganda as Kingdom, Uganda’s legal structure as a country and the integrity of the Kabaka.
Commenting on the development, Tycoon Ham said; “This is a technical issue that requires technical approach and procedure, not cheap politics and propaganda to unlawfully, fraudulently, disrespectfully and deceptively steal land from ordinary Ugandans and Kabaka’s subjects.”

“However to everyone’s surprise BLB land fraudsters are maliciously spreading falsehood, blackmail, and cheap propaganda that: “the ministry concluded that Kigo land belongs to BLB” undermining all the fundamental values of Buganda as a kingdom, Uganda’s legal structure as a country and the integrity of our Kabaka,” he added.
Recently, businessman Hamis Kiggundu alias Ham through his company Kiham Enterprises Uganda Limited confirmed with documents the ownership of Kyadondo Block 273 Plots 23974, 23975, 23976, & 23977, land at Kigo, totaling 37.767 Hectares/93.322 Acres which the Buganda Kingdom claims is theirs.

The land has a usable acreage of 78.086 Acres whereas 15.236 Acres incorporate access roads.