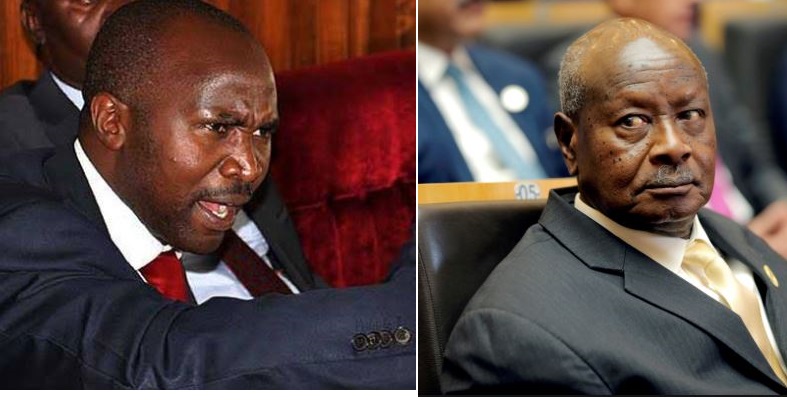 Theodore Sekikubo, the Lwemiyaga county Member of Parliament, has landed in trouble after the Constitutional court dismissed a petition he and other 10 MPs they filed in court, challenging the National Resistance Movement (NRM) Sole Candidature resolution.

Sekikubo, Monica Amoding, John Baptist Nambeshe, Barnabas Tinkasimire and other NRM rebel MPs petitioned the Constitutional court Vide CP No. 9 of 2019, challenging the NRM party’s resolution to have President Yoweri Museveni contest for presidency as a sole candidate during Party Primaries, without anyone contesting against him.

The Petitioners (NRM Rebel MPs) argued that  it was unconstitutional for the NRM party Chairman to be the only one allowed to contest not only for the position of Chairmanship but also the Presidency.

They argued that the act of Central Executive Committee (CEC) declaring Museveni as a sole candidate on February 19, 2019, in its four day retreat at Chobe Safari Lodge in Nwoya, blocked and suffocated interests of other would-be individuals in the party who have  aspirations  to become presidential candidates to contest for the 2021 elections.

The group claimed that CEC had no mandate to declare Museveni as a presidential candidate for the 2021 elections in the middle of this term (2016-2020) because it’s (CEC) five-year tenure of office is due to expire in July 2020 and therefore have no business in the next coming elections.

They advised that instead, grass root elections within the party had to be conducted from which CEC would recommend the successful candidates to the National Delegates conference.

The MPs thus prayed to court to intervene in the internal governance of their party which they claimed is not Democratic at all, because their party’s Secretary General Kasule Lumumba unfairly blocked them from participating in the parliamentary caucus retreat at Kyankwazi, where the Sole Candidature resolution was adopted.

However, the Constitutional court on Thursday July 2, 2020 dismissed the petition with costs, after it was ruled that the court had no jurisdiction to hear and decide upon such a matter.

Shortly after the dismissal, Kampala Associated Advocates tweeted thus; “KAA @KAAdvocates CASE ALERT: The Constitutional Court in CP No. 9 of 2019;(Hon. Sekikubo &10 others vs NRM) has struck out with costs the petition which was challenging the sole candidature resolution of CEC and NRM Parliamentary Caucus for lack of jurisdiction.”

This however means that Sekikubo and his colleagues will have to cough hundreds of millions of shillings to  the NRM in legal costs.

By the time of filing this article however, our efforts to reach MP Sekikubo for a comment about the matter were futile because he couldn’t be reached on his known phone numbers.