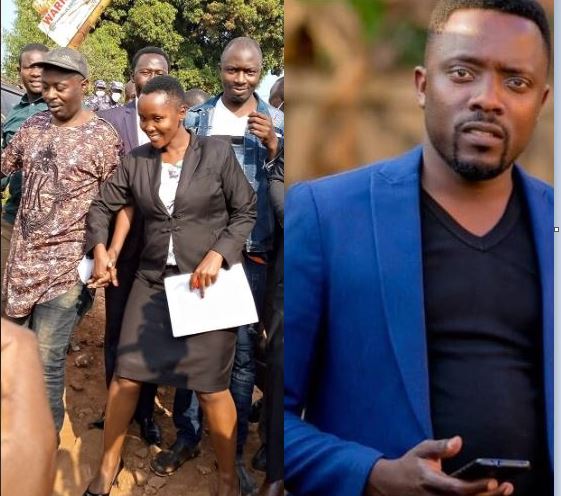 Renowned singer Gerald Kiweewa, who was arrested last week over allegations of disturbing the peace of Kayunga Woman Member of Parliament Aidah Elios Nantaba, was Tuesday afternoon freed from the Special Investigations Unit (SIU) in Kireka, where he had been detained since his arrest on Thursday.

Kiweewa was granted police bond after the police confirmed that there was no complainant in his case and that MP Nantaba had not lodged any complaints about the singer disturbing her peace.

His arrest came after he released a song titled ‘Nantaba’, which police detectives construed as  disturbing the quiet peace of Hon. Nantaba and inciting violence.

Meanwhile, popular comedian Hussein Muyonjo Ibanda aka Swengere and others who had been summoned to Jinja Central Police Station today reported themselves and here is what he said about their ordeal;

“I and other more two colleagues of mine Kasolo and Kalyowa reported at Jinja police station today according to the summons we received yesterday on cases of inciting violence and disobeying lawful orders.

When we reached at police, pastor Muwanguzi and Hassan Muwanga were also summoned yet they escorted us as sureties. We were asked questions that were not in the line of the cases written on our summons.

Below are the questions they asked;

1. How many people were at the radio when Bobi Wine was being hosted?

2. How many people did Bobi Wine come with from Kampala?

3. Which car did Bobi Wine use on that day?

4. What was the intention of the dog which was seen at the premises of the radio station (Baba FM)

5. What was the intention of the coffin which was found in one of the cars that escorted Bobi Wine?

Next step was releasing us on police bond, we are supposed to report back on 4th/08/2020.

Let me take this opportunity to thank our legal team which was led by Counsel Nasser Mudyobole, counsel Kakaire and counsel Galinsonga.

Thank you our fellow comrades in the struggle for standing with us.”