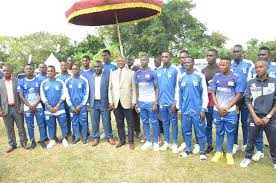 Masaza cup kicked off in high gear, 2019 champions Bulemeezitheir tittle defense with a 1-all draw against Butambala in the Masaza cup opener at the FUFA technical center Njeru, a game graced by the presence of Kabaka Ronald Muwenda Mutebi.

Bulemeezi came from a goal down to secure a point after conceding in the first half Courtesy of a Nsereko Sharif strike in the 23rd minute of the game.

Butambala were the better organized side and dominated while defending as a team in the first half and managing to limit Bulemeezi to just a handful of chances on goal. Bulemeezi’s biggest chance for an equalizer was in the 32nd minute of the game when Akram Muzanyi’s effort hit the wood work.

Butambala held on to their early goal to retire the first stanza with a 1-0 lead. Coach Simon Peter Mugerwa introduced fresh legs in the second stanza in hunt for an equalizer and indeed his army of Thomas Kakaire and Bernardo Kateregga was on duty as they combined to deliver a goal in the 75th minute to salvage a draw for the defending champions.