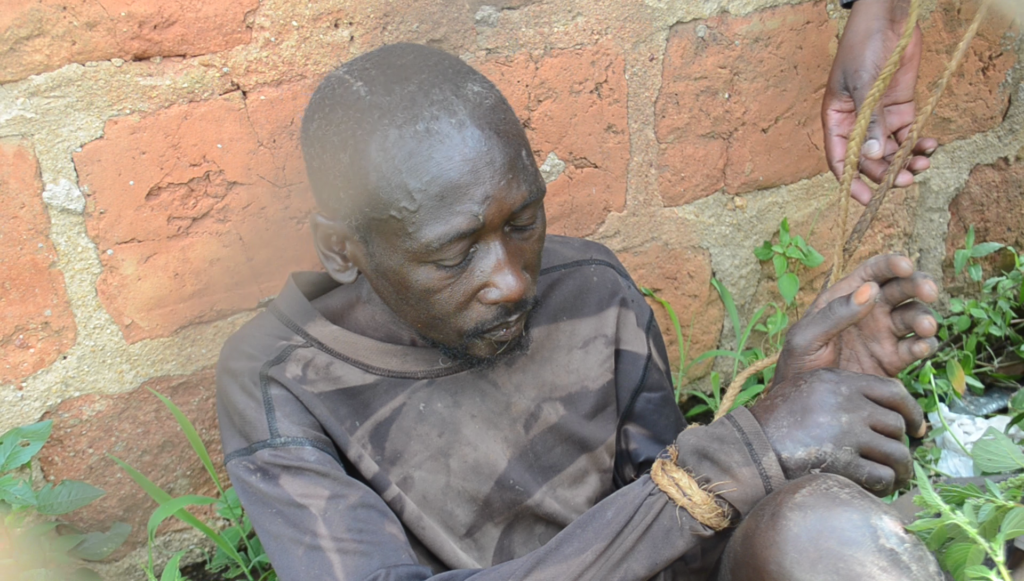 Mukono police are investigating a case under which a man identified as Fred Lukyamuzi, was brought and dumped at a car bond known as Wacity motors in Mukono town at night at 3 am, by unknown people.

Lukyamuzi’s situation is in bad shape, because he must have encountered acts of torture from his captors, as his fingers and knuckles are full of scars, also his head was cut with a sharp object.

Lukyamuzi is believed to be among hundreds of opposition national unit platform (NUP) supporters who were arrested during and after the January 14th elections.

We tried to engage him, but the brutally tortured Lukyamuzi, could only say out his name and Kiteezi a village in Wakiso which seems to be his home area.

Patrick Mubiru, the car bond proprietor and also NRM chairperson for greater Mukono, revealed to us that his employees phone called him informing him that someone has been dumped next to my car bond, then I called Mukono police.

Kennedy Kaweesa, a resident who owns a shop next to the bond, said that at first we thought it was a dead body dumped here, but later we realised that he was breathing and his arms and legs tied with ropes.

“Lukyamuzi must have been undergoing a grave torture sessions in an illegal detention house somewhere, because his body is full of scars and fresh wounds” Kaweesa said.

However residents proposed that the bond owner check in the video footage from the CCTV system that is planted around the bond, a move that was rejected by Patrick a car bond owner saying that he has already reported to police.

For several days NUP president, Mr Robert Kyagulanyi, while appearing on his social media platforms, has been demanding the government for the immediate release of all the National Unity Platform abductees and political prisoners.

Mukono police later came with its motorcycle and picked up the victim for further investigations.

Speaking to the Kampala metropolitan police spokesperson Luke Owoyesigyire, confirmed the incident and said that police have started to investigate the matter.