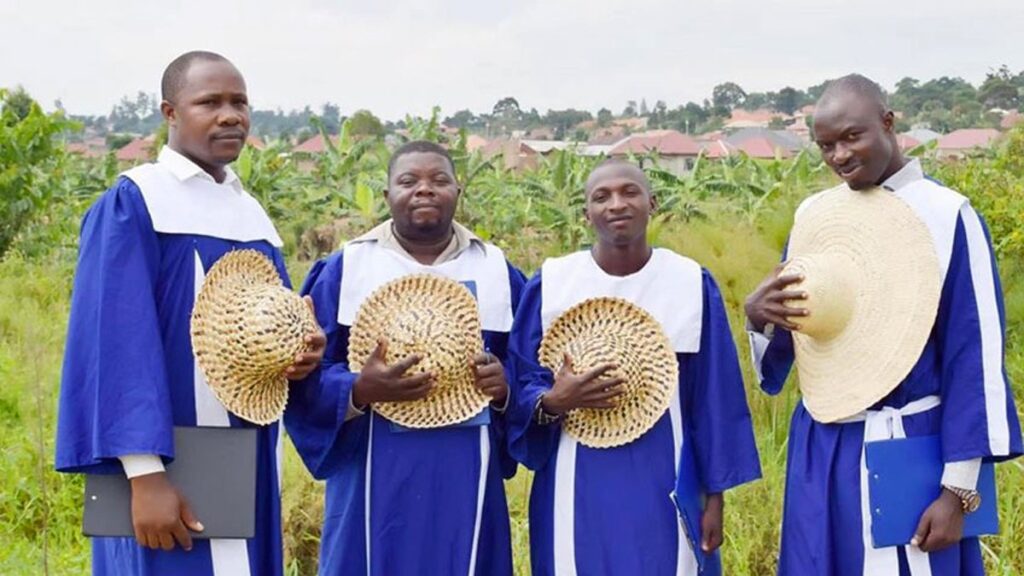 The bizontos were arrested by police and detained on charges of promoting sectarianism and offensive communication. Contrary to section 42 a (i) (d) of the Penal Code Act as amended by Statute

Julius Sserwanja also known as Kidomoole, Mbabaali Maliseeri (Uncle Luyuguumo), and Gold Ki Matono, also known as Opeto were arrested today from Radio Simba after posting another satirical skit which, according to the government was used to promote sectarianism. Their counterpart Sssaabakaaki Peter (Omuzinyuuzi) was not found at the station at the time of their arrest.

According to Sserwanja, the group leader, police told them they were arrested for allegedly skipping police bond following their earlier arrest last year. He says they are shocked by the re-arrest because they have been reporting to Kibuli CID headquarters in Kibuli during the prescribed times.

“We have been reporting at Kibuli, but whenever, we went there, the officers handling that case told us the case was going to be closed anytime. They never signed anywhere, on paper. They even thanked us for the new skits,” he said.

In their latest skit, they said Ugandans ought to be whistleblowers about the ongoings in the country. They wondered whether God has forsaken Uganda, saying poverty is more rampant, insecurity rife with everyone suspicious of another with belief that they are spying on them. They said Ugandans now fear to hitch car lifts because of the state inspired kidnaps using vehicles infamously known as drones. They also hinted at the election malpractice asking why God just looks on as Ugandans continue to suffer from election malpractice with even the Electoral Commission posting fake election results.

“God is there any particular group that you gave exclusive rights to own all the land in Uganda, they want to take all the land here…God, if you so wish, manifest yourself. Even if it means through the [American ferry recently docked at Mombasa] so be it…God, really why do you continue to just look on as we continue to suffer and be at the mercy of just a few people. God, manifest your power and make some of our tormentors suffer as well. We’ll enjoy their suffering when we see them writhing in pain. Did you send these people to be in charge of the lakes that they have now sold?” they said in the skit.

“God, if you want the names of our tormentors we can provide you with the list. They are very few, they borrow money every day to live large and then make us pay back through the nose. They behave like lords of the earth, they own villages and villages of grabbed land. For sure, God what did we do to you? How can you just look as we continue to be tormented by these few people?”, they added.

Bizonto were first arrested in July last year after producing and circulating a skit titled “who are our leaders,” in which they mockingly prayed for Uganda’s top leaders. The seven-minute skit which was uploaded on July 15, 2020, on YouTube, started with a musical and in it, the group members listed all persons holding key positions in the Electoral Commission, Uganda Revenue Authority, Uganda Prisons, Uganda National Roads Authority, National Social Security Fund, Bank of Uganda, ministry of Finance, Internal Security Organisation. Nearly all individuals hail from western Uganda.

They added that although the known Inspector General of Police (IGP) is Martin Okoth Ochola, the actual police boss then was his deputy Sabiiti Muzeeyi, who also hails from the west. They said that because children were stuck at home following the closure of schools due to the coronavirus pandemic, they needed to be taught to always pray for their leaders.

CID spokesperson, Charles Twine, said that investigations into the matter are now complete and the team members will now be arraigned before Buganda Road Magistrate’s court later today. The file has already been sanctioned by the director of public prosecutions (DPP).

Section 41 of the Penal Code defines sectarianism as the practice of degrading or exposing to hatred or contempt or disaffection for anyone on the basis of religion, tribe, or ethnic or regional origin by utterance, printing, publication or performance any such act. According to the Penal Code whoever engages in such acts commits an offence and is liable on conviction to imprisonment for a term not exceeding five years.