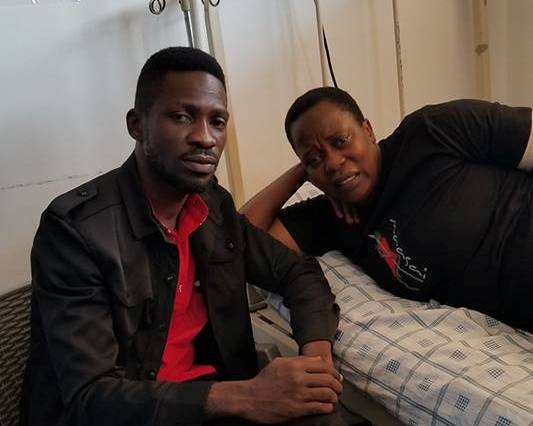 I have seen one of the not so credible Luganda Newspaper listing me among people fighting to become the Leader of Opposition in the 11th Parliament. And that because of that I among others have put the NUP party, Secretary General Lewis Rubongoya together with the NUP-Principal on tenta hooks as we fight for these positions.

I wish to categorically state that the most urgent matter now which we can’t allow anybody however sweet his /her conversation might nothing should divert us from the move to claim for our victory for our Country.

And if we are to strategically settle for providing Ugandans an alternative government, then it should be worked out by serious and knowledgeable people on who deserves to serve in these places. It shouldn’t be through marnovers,lobbying or buying one’s way to Office. To me the priority now is to lead our cadres to win local council elections, trace-up and work within the law to get them out of jail.

First of all we should make a research and man-hunt to know how many people are in prison or detention centres and Safe houses. We should work on a register to capture and getting to know the pattern of these murders, the profile of those kidnapped…we need to study and establish the gang that is over running our country We should draw and write down a list of those killed. Who are they,where were they killed from and how they were murdered.

The diversions talk is being thrown around by the regime spinning doctors. The intention is to make is change the conversation from stolen elections to the “greedy opposition” and Parliament. The voter will look at is and see no difference between the junta and his people and Kyaagulanyi and his money “minded”

Dozens of young people are being picked one by one of our young people. No body gets to tell us where they are or what offence they committed and when we expect the in court.

The Kalangala 49 and the absurdity of having the aligned before the army court.

The diversionary started with our usual conversations…the greedy MPs are to earn millions in car allowances, the $8000 wardrobe up grading ( I have never recieved such a payment) and above this a fat salary for the next five years.

I don’t know why we… colleagues are betraying the people of Uganda that much….how can we accept to be drawn in such conversation just a few days after polls.True the budget process we have started make so many proposals,what you see is just the least wait to see the Presidential elections.

I don’t want to defend Paliament but its quite unfair to pin these outrageous budget proposals to the young people joining Parliament because they haven’t been to any meeting as MPs…these are people to be sworn in,in May when the term of the current government has expired….so how can you pin down a new MP for awarding him/ herself exorbitant sums of money to buy a car?!

Ofcourse my excited young politicians joining Parliament for the first time will comment in order to be stars through the media…they still have that feeling that they can even serve as MPs for free…and tell Government to use their salaries,car allowances to buy medicine in our empty health centres,to work on schools,to create jobs for the youth and so on….the good will and selflessness that drives the first timers will wane off slowly as reality sets in.

My new MPs are going to learn,that the money they will denounce and return to the government treasury will be shared out among Nrm politicians and the technical staff in the finance Ministry…just remember that at the pick of covd19 your MP was made to return 10 billions we had ” given to ourselves in order for us to join others who were donating food to the Locked up Countrymen…great but if I’m to ask what did that 10 billions do,how did the regime spend it……was it taken to Mulago or spent on buying food for the starving Ugandans ?

At the risk of being misunderstood, I want to request my fresh collegues that let us organise ourselves to fight the budget proposals….The fact of the matter is that, we are being set up…against the people… setting up Parliamenterians against themselves. If we mean business let’s organise ourselves into a viable and sustained battle against this “robbery”.

This time we have real numbers in Parliament…Imagine NUP has sixty five MPs,FDC has 36, UPC has 10,Jeema 1,PPP 1 and about two dozens of the independent, this with a well coordinated lobby of the Nrm MPs during this honeymoon between them and voters.

With such an effort I think we can be pull off a wonderful pro-people debate on the bugdet estimates suggested by the regime. We can use the same force redraw another budget which is pro- people and lay out the true priorities of Uganda. I heard that Hon. Ekannya bounced back and he is one MP who is very resourceful in this area.

For now,.the appointment I humbly seek is to be nominated to head the team to handle the Post- election period and working out an infrastructure to take us through this period basing on a coherently drawn upwork plan for the Party and its allies.

If we don’t do this and guide our people not to be drawn into useless talk then we are as empty as our predecessors…Although the opposition is to be led .by a young Political party, the opposition in Uganda is old enough to be able to do things differently…I also strongly advise that it is high time we learn to do more and talkless.

Let us burn midnight oils and give ourselves a new image,restate our values and work by them…. we must be a team that does things a bit differently from those who sat on the left side of the Speaker in that August House before us.

I know all of us over spent ourselves out during campaign….Peopleì out the MPs to look for opportunities to earn money and clear these dabts and upgrade themselves to survive under a new status.

The current political conversation favors Museveni…He must even be laughing himself into craziness and praising God for giving him a lazy opposition.

Yours in the struggle