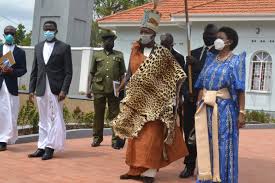 Speaking at his 28th coronation anniversary ceremony at Nkoni Palace in Lwengo District Saturday, Kabaka said both his cabinet and Lukiiko (Parliament) have been consistent in demanding what belongs to the kingdom through negotiations and will continue to use the same avenue to achieve their goal.
“For the last 28 years, we have been at the forefront of demanding justice, federal, land and our buildings. These and other things, we call them Ebyaffe,” he said.
“Í want to emphasize this, we shall not relent in our quest for Ebyaffe through negotiations as we have done in the past.”
The kingdom had threatened to sue the government on grounds that it had failed to meet its obligation as stated in the law that reinstated cultural institutions in 1993.
The Kabaka also castigated people who are pushing for the abolition of the Mailo land tenure system, which is mainly in Buganda, saying they are bent on weakening the kingdom.
He said some kingdom critics were portraying Buganda as an institution that is not accommodative yet all people, regardless of their cultural backgrounds, have peacefully settled in Buganda over the years.
“For those who want to scrap Mailo land their goal is to weaken Buganda. This prompts us to ask, why land in other parts of Uganda is not talked about. Why Buganda land?” he said
Mr Charles Peter Mayiga, the kingdom Katikkiro (prime minister), said prior to the enactment of the Land Act 1998, Buganda had advised that government implements the Busuulu and Envujjo law of 1928 which protected rights of both landlords and tenants but their proposal was never considered.
“When Mailo land is abolished as suggested in some quarters, one of the key pillars on which this kingdom was built will be destroyed. You parliamentarians who are here should know this; Buganda has never failed to discuss this (land) issue. We are ready to sit and show you how best land wrangles can better be resolved,” he said
The occasion was done in the scientific manner, all invited guests had to observe Covid-19 guidelines issued by the Health Ministry.