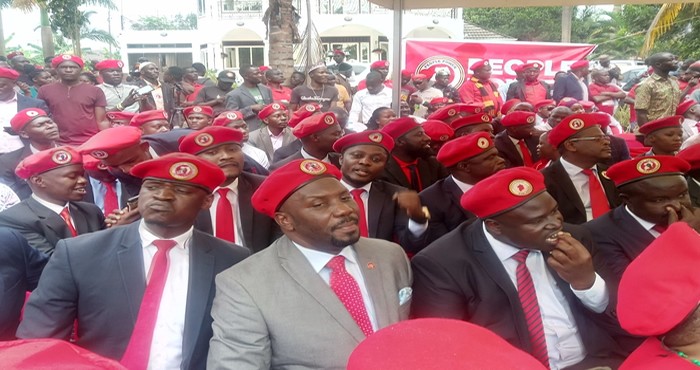 I’ve not in a long time seen Baganda, elite and ordinary, feel so motivated, so filled with conviction and an uplifting of their spirit, as during this political phenomenon called People Power.

It’s something refreshing to witness.

The region had in recent years started losing all sense of hope and self-belief. Baganda felt their area was fading into humiliating inconsequence.

On Sunday Jan. 26, 2020 during a political discussion on 94.1 Bilal FM in Kampala, the opposition politician Michael Mabbike made a statement that has stuck in my mind all year.

Mabbike warned that in the next ten years, Baganda will find themselves the first people in Uganda to have no land of their own.

That statement cut through me.

It crystallised the underlying feeling behind the rise of the People Power pressure group led by Bobi Wine.

These 34 years of the NRM rule have, in a general sense, created a Uganda stable at its skeleton.

There is no doubt that this has been an NRM achievement, the ability to hold the country together using whatever tricks, trade-offs, bribery, force, PR, patronage and so on.

That’s why President Museveni can afford to deploy large contingents of the army to South Sudan, the Central African Republic, Somalia and to a degree Congo in a peacekeeping (some would say plundering) role.

But this holding of Uganda together without all-out civil war or state collapse such as we see in Central African Republic, Somalia and 1990s Sierra Leone has taken its toll on one region in particular: Buganda.

Buganda has suffered internal bleeding as the price for the NRM’s holding Uganda together.

As with internal bleeding, there are no obvious cuts and wounds on Buganda’s body, but the internal organs are bleeding.

Corruption by cabinet ministers, land-grabbing by army generals and the general lawlessness and impunity that is the NRM have seen large areas of Buganda parceled off.

Square miles in northern Buganda are owned by a handful of political and military officials, most of them from western Uganda.

Thousands have been evicted from their land in Luwero, Nakaseke, Kapeeka, Mubende and other places by these land-grabbing government officials.

Museveni has turned a Machiavellian blind eye to the massive looting of government funds and the land-grabbing as a trade-off for the army not uniting and rising against him as it did against Milton Obote, Yusufu Lule and Godfrey Binaisa.

This is the political background to the rise of People Power.

A whole generation of Baganda has grown up under this abnormal environment of a wild, commercialised economy without government discipline, morals or administrative intervention.

Many Baganda have been forced to sell precious ancestral land to buy boda boda bikes or pay school fees, only to graduate from school with no jobs — and no land.

Beyond Baganda themselves, there is a large section of Ugandans of all ethnic groups huddled together in Kampala’s shabby slums in surroundings without drainage, decent toilets, eking out a precarious existence selling knock-off Chinese products, chapati, engaging in prostitution, recording bootleg DVDs and other hand-to-mouth occupations.

So, imagine being a Muganda, forced into the life of an urban squatter in your own kingdom and every once in a while you hear or read these news stories of massive corruption scandals, with billions of your tax shillings looted by NRM people, most of them westerners.

Of course somebody reading this is going to say I’m “inciting the people.”

If that’s it, so be it. I’ve been to Luzira prison before and can return there.

All I’m doing is trying to show the reality that the average Ugandan, especially one from central Uganda, lives.

Even if you are an NRM supporter, you need to give thought to this article I’ve written on this subject.

Then come back here and we have a chat.

I’m not a People Power or NUP member, but I can’t help but really feel for this large section of Ugandans, who live and walk on shaky economic ground in Kampala and the wider Wakiso area.

I don’t think People Power is about “Ganda nationalism”, as many say.

I think it is a movement formed around hurting people crying out for political and economic justice.

The theme of social justice, corruption and income inequality in Bobi Wine’s latter songs after 2004 is just like that of the anti-apartheid struggle in South Africa.

Similar feelings erupted in Amuru in northern Uganda when the issue of leasing land for commercial use emerged a few years ago.

Buganda is both blessed and cursed by the historical fact of the building blocks of the modern Ugandan state being on its soil.

A blessing, when the state is in the hands of a responsible government and the country’s best schools, hotels, hospitals and key government buildings and corporate head offices located there.

A curse, when the state is in the hands of a regime that, to stabilise the army and political system, has let corruption and property-grabbing run wild and free.

We can say all we want about Milton Obote, but looking back now with the benefit for hindsight of the 34 years of the NRM, the conflict between the UPC government and the Mengo government, tragic as it was, left most of physical Buganda intact.

Buganda since 1986 has experienced the inverse of 1966: the kingdom was nominally returned and even experienced after 1996 a new period of enterprise (CBS FM, BBS TV, Mutesa I Royal University, K2 Telecom, etc.)

But it has suffered the internal bleeding I’m describing, its youth reduced to a half-baked education, menial jobs, struggling at the margins of the economy, Buganda’s land sub-divided into bits and pieces.

Much of the rest of Uganda is also affected by this internal bleeding.

A good example is Mbarara, economically the largest town in western Uganda and the home town of many an NRM government official and military leader.

The disorganisation that is Mbarara, the descent of this once-beautiful town into Ndeeba-like hectic chaos, is a reminder that it is not just Kampala that has been affected by the erratic and insensitive leadership style of Yoweri Museveni.

However, Buganda, Kampala in particular, only suffers much more so because of this geographical location at the heart of the economy and government operations.

Uganda under the NRM is gradually becoming like Kenya, where most of the land is owned by a handful of political families and most of the population is urban renters with no land of their own.

That’s why everything that People Power does strikes a chord in central Uganda.

There have been prior efforts to speak up for Buganda, from the university students Nkobazambogo association to the DP-affiliated TJ, UYD and Ssuubi activist groups, and so on.

But something about the energy, charismatic, almost paramilitary image and sense of mission of People Power — with their raised fists, red berets and reference to their leaders as “Commander Nsubuga” — has injected a new feeling of hope and strength into Buganda.

Less than a month since the launch of People Power’s offshoot, NUP, the party is already the de facto number two in Uganda after the NRM.