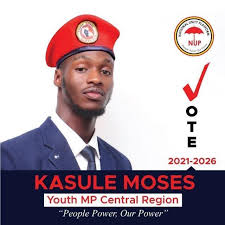 The Uganda Electoral Commission has disqualified the National Unity Platform-NUP central youth parliamentary candidate from the ongoing elections at the National Teacher’s College in Mubende district.bit.ly/bettingoffersug

The Central and Southern Region Regional Elections Officer, Robert Baine, said the NUP candidate, Moses Kasule used a voter outside the Electoral College to back his candidature.bit.ly/bettingoffersug

Kasule’s troubles started from an application filed Moses Chris Mufakinanye, one of the youth delegates accusing him of flouting the laid nomination procedures in the Parliamentary Elections Act 0f 2005

In his petition, Mufakinanye accused Kasule of using a non-youth council delegate to second his candidature to the Electoral Commission to facilitate his nomination. Mufakinanye also faulted Kasule for the Nabweru Division Vice-Chairperson, Emmanuel Kiwuuwa on the list of his nominators yet he isn’t a member of any District Youth Council, which renders his nomination void.

“Under Section BC of the parliamentary Elections Act 2005, all members of the District Youth Council within each region shall constitute an electoral college for the election of the representative of the Youth in Parliament for that region.  Further Section 6 (5) of the National Youth Council Act, Cap 319 defines the District Youth Council (Electoral College) to consist of among others; the District Youth Committee, Chairperson of every sub-county, division, municipality to town council youth committee, the Secretaries for Female Affairs and Finance, giving not provided to any member outside the youth council,” the petition reads in part.bit.ly/bettingoffersug

A tribunal chaired by Hajjat Aisha Lubega Bassajjanaku, the Electoral Commission Vice Chairperson studied the dispute and adjudicated in favour of the petitioner. The tribunal ruled that Kasule indeed flouted the legal procedures for his nomination, when he presented a signature of the ineligible seconder, thereby rendering his nomination irregular.

The tribunal directed the Central Region Youth Representatives Election Returning Officer, Reticia Nantabo to disqualify Kasule from the polls.  Kasule declined to comment, saying he was yet to yet receive communication from the Commission on the matter.

The central youth parliamentary elections had been scheduled to place in Masaka city and were switched at the last minute to Mubende district. The delegates were still reporting at the Mubende election venue by 1.00 pm. None of the candidates had arrived to begin campaigning.

Some of the delegates said that they had already booked hotel rooms in Masaka but were shocked to learn that the venue had been changed to Mubende. Alex Bogere, a delegate from Mukono district says that some candidates had already booked accommodation for their supporters and when the venue was changed from Masaka to Mubende district.

Asked whether the Commission would compensate the delegates for the money spent in Masaka, Beine said the delegates are always facilitated to cover the expenses they incur