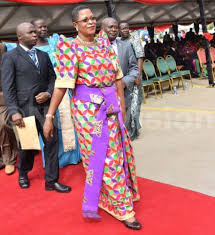 Anita Among emerged unopposed in the just concluded election to retain her Bukedea Woman MP seat. Among was the only candidate who was unopposed in Eastern region.bit.ly/bettingoffersug

The former FDC deputy treasurer exhibited high levels of professionalism and sound leadership during her tenure as Vice chairperson of the Committee on Commissions, Statutory Authorities and State Enterprises (COSASE). She made her mark during the probe on Bank of Uganda over the fraudulent sale of seven Banks. She is expected to tussle it out with the likes of David Bahati, State minister for Finance, Robina Rwakoojo, Gomba West MP, Muhammed Nsereko, MP for Kampala Central and others. Bahati will have to resign as a minister if he is to vie for deputy speakership as the Parliamentary Rules of Procedure bar Vice President, Prime Minister or Ministers from contesting for position of Speaker or Deputy Speaker.bit.ly/bettingoffersug

Anita played an instrumental role in the mediation of South Sudan leaders Salva Kiir and Riek Machar. Her independent and reconciliation skills would be of great value in mending the broken relationship between the opposition parties in the House and the ruling NRM government.

In 2018, Anita Among graduated with a Bachelor Degree in Law from Kampala International University in a ceremony that was attended by President Museveni. The two have been working closely even before Anita crossed from FDC to NRM. In fact, before Anita crossed to NRM, Museveni described her as a “good opposition” member who is easier to work with for the development of the country.

As time continues to tick towards the new Parliament in June this year, all eyes are now gazed on who will take up the Speakership and Deputy Speakership seats. It is becoming more interesting considering the fact that the reigning Deputy Speaker Jacob Oulanyah is now eyeing her boss, Rebecca Kadaga’s top seat.bit.ly/bettingoffersug

Oulanyah took a first shot at the Speakership seat in 2016 and it took the intervention of President Yoweri Museveni to convince him to step down to allow Kadaga finish up what was termed as her “last term” as Speaker. However, by the look of things, Kadaga is playing the game of hares and not ready to relinquish the sweet speakership seat for Oulanyah as per the 2016 gentleman’s agreement. About two week ago while appearing on Capital Gang on Capital FM, Kadaga emphatically said that she will be Speaker come June this year.

If the President fails to convince Kadaga to step down for Oulanyah then the two will be separated by the ballot in a heated contest. The NRM Central Executive Committee (CEC) is expected to play a pivotal role in determining the next Speaker before the same matter is taken to the NRM caucus.

According to sources, Oulanyah will not accept any bargain or anything else other than the Speakership slot. Kadaga will become the longest serving Speaker since the time of Independence if she makes it through for her third term. However, this is anticipated to be the toughest race she will encounter as moro County MP who also sits in CEC as NRM vice chairperson for Northern region, is doing all it takes to dislodge her.bit.ly/bettingoffersug