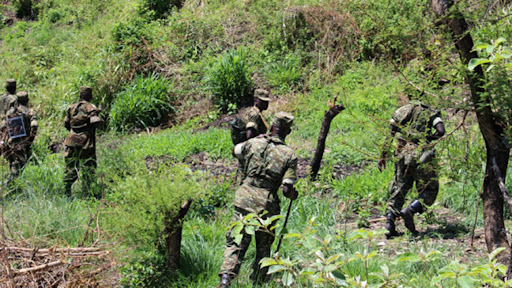 The Ugandan government says it is targeting rebels it accuses of terrorist attacks in Kampala. Many Congolese fear the incursion is cover for yet another plundering of their country.

The rebel group, the Allied Democratic Forces, is considered the deadliest armed outfit in the region and was designated as a terrorist organization this year by the United States.

Uganda hopes the assault, which is being conducted jointly with Congolese forces, will evict the group from its bases in Congo. But among some civilians and observers, the incursion has raised numerous concerns.

Many cite Uganda’s conduct during a previous intervention in Congo, from 1998-2003, when its forces were accused of killing and torturing civilians, plundering natural resources, and destroying villages. The latest mission, analysts say, could also compound regional security tensions, particularly with neighboring Rwanda, and could lead to reprisals against civilians, as has happened in the past.

Here’s a look at the origins of the Allied Democratic Forces, or A.D.F., why Uganda went after the rebels in Congo, and how the latest operation may affect the country, Africa’s second-largest by area.

Who are the Allied Democratic Forces?

The A.D.F. was formed in eastern Congo in 1995 by two groups opposed to Mr. Museveni’s government: the National Army for the Liberation of Uganda and members of Tabliq, an Islamist sect in Uganda.

The group had backing from the Sudanese and Congolese governments, which used it to undermine Mr. Museveni’s government, according to Stig Jarle Hansen, a professor at the Norwegian University of Life Sciences, and the author of “Horn, Sahel, and Rift,” an examination of the spread of jihadist groups in Africa. With the blessing of the then-president of Congo, Mobutu Sese Seko, the A.D.F. built alliances with local communities and leaders and became heavily invested in various economic sectors, including timber, agriculture and gold mining, Mr. Hansen said.

But after Mr. Mobuto was overthrown in 1997, the group retreated into the Rwenzori Mountains between Congo and Uganda and the number of violent events ascribed to it dwindled.

EDITORS’ PICKS
Doris Lee, Unjustly Forgotten, Gets a Belated but Full Blown Tribute
Dec. 30, 2021
How Nicole Kidman Learned to Love Playing Lucille Ball
Dec. 26, 2021
Each N.F.L. Team’s Playoff Path: Week 17
Jan. 2, 2022
How Disgust Explains Everything
Dec. 27, 2021
Counterculture to Counterintuitive: Cannabis to Help You Diet?
Jan. 1, 2022
Once Upon a Time … Bedtime Stories Were Just for Kids
Jan. 1, 2022
Once a Janitor, Now the Bar Mitzvah Photography King of Montreal
Dec. 31, 2021
Marriage Requires Amnesia
Dec. 24, 2021
Juliette Lewis, an ‘Imagination Freak Fairy,’ Knows Her Worth
Dec. 27, 2021
How Will Americans Eat in 2022? The Food Forecasters Speak.
Dec. 28, 2021
But in 2013 the Congolese military began a major offensive against the group. The Allied Democratic Forces, working with other militia groups, responded with brutality, attacking not just the army but also killing hundreds of people in North Kivu and South Kivu provinces. The offensive eventually undermined the strength of the rebels, and the group’s founder, Jamil Mukulu, fled, only to be arrested in Tanzania in 2015 and then extradited to Uganda.

Under its new leader, Seka Musa Baluku, the A.D.F. pledged allegiance to the Islamic State, which claimed its first attack in Congo in 2019. But while there is some communication, financial ties and ideological affinity between the two entities, analysts say the extent of their coordination is not clear.

The A.D.F. has around 1,000 fighters, according to U.N. estimates. Its militants have escalated their activities in recent years, targeting peacekeeping forces, conducting suicide attacks and jail breaks, and killing at least 2,155 people in eastern Congo since June 2017, according to Pierre Boisselet, the coordinator of the Kivu Security Tracker.

Why did Ugandan troops enter Congo?

The incursion was prompted by a series of suicide attacks on Nov. 16, which targeted a police station and a street near the Ugandan Parliament. Mr. Museveni vowed to go after the attackers, saying on Twitter, “the terrorists invited us and we are coming for them.”

For President Felix Tshisekedi of Congo, the operation bolsters his efforts to bring stability to the restive eastern regions. Last May, he declared a “state of siege” in North Kivu and Ituri as armed groups wreaked havoc across the two provinces.

But those measures have brought little relief, and Mr. Tshisekedi, who is up for re-election in 2023, faces increasing pressure from the region’s elites and lawmakers over his inability to tackle decades of instability, said Jason Stearns, the director of Congo Research Group.

On Nov. 30, Uganda launched air and artillery raids against the A.D.F., and on Dec. 3, it sent troops across the border in an operation code-named Shujaa, or “Bravery.” Mr. Tshisekedi says the presence of Ugandan troops is temporary, while Uganda has said that the mission’s progress will be assessed after two months.

Beyond that, the two nations have provided few details about the operation.

Image
Ugandan soldiers on patrol in a district of North Kivu, Congo, on Dec. 8.Credit…Sebastien Kitsa Musayi/Agence France-Presse — Getty Images
But in Uganda, lawmakers are questioning how the military began the incursion without seeking their approval. Regional experts also say that Mr. Museveni has long exploited Western fears of Islamist terrorism — including overplaying the A.D.F.’s connection to jihadist movements — to advance his own interests. In the past, Ugandan suspects accused in cases related to the A.D.F. have claimed that they were tortured to wring confessions from them.

The troop deployment is probably also aimed at securing Uganda’s oil fields adjacent to Congo, according to Helen Epstein, author of “Another Fine Mess: America, Uganda, and the War on Terror.” Construction of a multibillion-dollar pipeline that would carry crude oil from western Uganda to the Indian Ocean is set to begin in 2022.

How is the operation going?

Experts, including Mr. Boisselet of the Kivu Security Tracker, have said that the operation has gained ground in an area where violence by the A.D.F. is no longer rampant, suggesting that the group is now less active in what has been called the “triangle of death.” The area is situated between the towns of Eringeti, Mbau and Kamango on the Ugandan-Congolese border.

“The advertising of the quick wins was a bit puzzling,” he said.

What are some of the concerns about this operation?

The Ugandan and the Congolese armies have been accused of committing gross human rights violations in eastern Congo. In early December, Amnesty International urged both countries to protect civilians and, if necessary, evacuate them if military facilities are identified near civilian homes.

Many Congolese also worry that the latest incursion will allow Uganda to plunder their nation’s resources again. This year, lawyers for Congo asked the International Court of Justice to get Uganda to pay almost $14 billion in reparations stemming from its previous intervention.

“There’s no way out of this morass militarily,” he said.