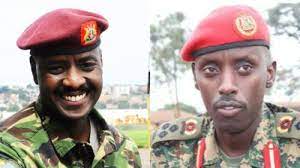 Command in chief  Museveni has, on Wednesday, reappointed Lt. Gen. Muhoozi Kainerugaba as the Commander of the elite Special Forces Command (SFC) in a major shakeup that also affected the army top brass.

Gen. Museveni, who is also the Commander-in-chief, made the changes in the various dockets in a move that raised eyebrows.

In the reshuffle, Muhoozi, aged 46, served previously as the founding commander of the force returns to the helm of the elite forces replacing Maj Gen James Birungi.

Maj Gen Birungi has been moved to South Sudan in the special Assignment after a short stint at SFC where he was commander since last year. He replaces Maj Gen Lokech.

While speaking to the media, SFC Spokesperson, Maj. Jimmy Omara welcomed the appointment of Gen. Muhoozi at the elite force.

“We welcome the return of Lt. Gen. Muhoozi at SFC. During his previous tenure, SFC prioritised specialised training and professionalization. We are grateful for Maj. Gen. Birungi’s service at the force,” said Maj. Omara.

Maj. Omara revealed that SFC will continue to supported the armed force and a force to reckon with in Eastern Africa and beyond.

Martin Ochola has been re-appointed as the Inspector General of Police (IGP) after serving on appointment effective 4 March 2018 replacing the embattled Gen. Kale Kayihura.

IGP Ochola’s Deputy Maj Gen Sabiti Muzeyi has been recalled to Headquarters as he awaits deployment as the reshuffle takes shape.