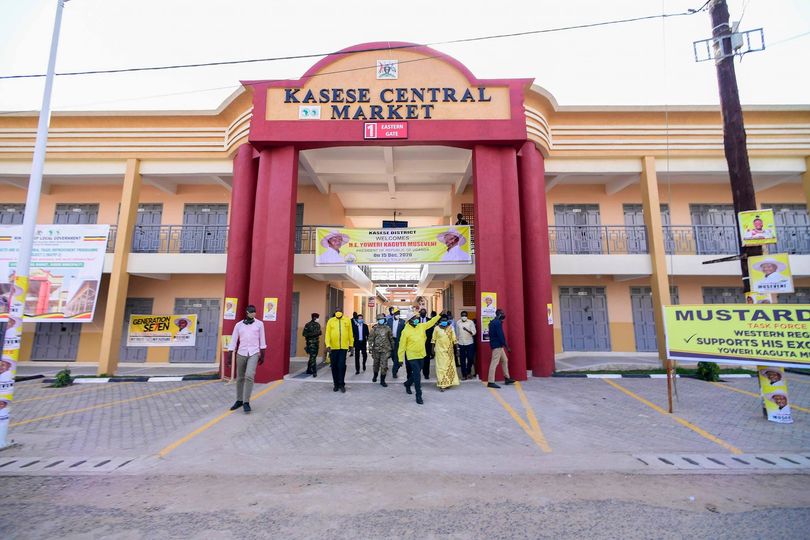 President Museveni, who has kicked off his campaign trail in the Rwenzori sub-region commissioned the state-of-art modern market that cost up to UGX14.9Bn inclusive of tax as the government moves to boost creation of markets and value-addition to boost trade in Uganda.

While speaking to the press, Assistant Commissioner Geoffrey Ettedu, National Programme Coordinator – Markets and Agriculture Trade Improvement Programme (MATIP), revealed that the modern market is a value-addition facility for over 1000 vendors that were previously operating in the temporary market.

He also revealed that the state-of-art market was installed with CCTV cameras, PA systems as well as digital flat screens to air communications, adverts and news updates.

Tasked to elaborate on the rates, Ettedu revealed that the ministry of Local Government and Kasese Municipal council were in discussion with the various stakeholders – including vendor leaders to come to the subsidized rates.

On value addition, the national coordinator revealed that special facilities such as high voltage power and storage had been provided to cater for vendors and entrepreneurs that sought to set up milling and processing lines.

“We have reserved spaces for those processing and packing fish, slaughterhouses (abattoirs) and other minor value addition. Water harvesting and solar lighting in the market to cut down on the utility bills and costs on the vendors,” revealedKasese Central Market is one of the 12 markets countrywide that have been rebuilt under the Markets and Agricultural Trade Improvement Programme (MATIP-1) – a multi-million-dollar project supported by the government and the African Development Bank.

Implemented through the Ministry of Local Government, Markets and Agriculture Trade Improvement Project (MATIP) was set up to contribute to the agricultural Chapter of the NDP specifically towards improved market access and infrastructure development.

Ettedu revealed that Kasese Central Market is one of the seven (7) markets that will be commissioned as the government moves to prioritise development and cultivating value addition.

Kasese Central Market falls under USD 93.73Million MATIP-II (second) phase focusing on improving marketplace infrastructure, adding value and facilitating trade (including capacity building) in nine municipalities and two urban communities located in the four regions of the country Other markets under MATIP II include; Entebbe (Kitoro), Masaka, Mbarara, Arua, Moroto (Lopedru), Soroti and Tororo on the one hand, and Kasese, Kitgum and Lugazi, on the other hand.

Four Markets have since been commissioned to include Tororo Central Market, Soroti Main Market and Busia and Kasese Central Market presently (December 15, 2020)

Moroto (Lopedru), Kitooro Market (Entebbe) and Kasese Central Market are ready for commissioning with Arua, Mbarara and Masaka Markets are at completion stage.

Sharon Natukunda, a vendor, revealed that the new market comes as a relief since it is spacious and will attract many customers and increase the income of the traders.