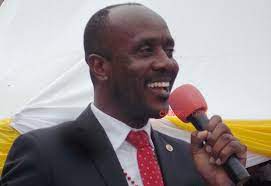 Few weeks ago, a group of Banyakigezi resolved to endorse former Rubanda West MP Henry Banyenzaki for President of Uganda in 2026.
This declaration came after powerful politician’s from Kigezi were uprooted & sidelined in the recent reshuffle.
Kigezi comprises of the districts of Rukungiri, Kanungu, Kisoro, Rubanda, Rukiga & Kabale. For strategic geo-political purposes Kigezi boarders DRC & Rwanda.
Kigezi has been a powerful entity in our body politic. It has had two Prime Ministers, two governors of Central Bank, and all powerful ministers from Finance to Local government, security, internal affairs, National guidance, East Africa etc
Kigezi is second to Ankole in having a big number of Senior military officers since NRM came to power. Kigezi as well has been leading in academia with a huge number of professors than almost any other region. It has had many vice chancellors and chancellors, supreme court judges, permanent secretaries, top executives of state agencies among others.
Above all Kigezi has had the most powerful post independence opposition leader Dr Kiiza Besigye & other prominent regime critics like Justice Kanyeihamba, Jack Sabiti among others.
Historically and todate, Kigezi has had powerful religious leaders like Festus Kivengere, Staneley Ntagali, Rev Fr Gaetano Batanyenda, Dr Zac Niringiye, the first black Arch Bishop of COU among others.
Kigezi has obviously been a giant in business with big names like Amos Nzeyi, Charles Mbire, Aponye, Musinguzi Garuga, Ceaser Mulenga among others.
Kigezi has enjoyed this powerful status since independence with personalities like Dr Philimon Mateke, Dr Rwanyarare, Kalekyezi (father of Kayihura), Dr Nsaba Buturo among others shaping the politics of our country.
Briefly, there is no doubt that Kigezi is a key player in our politics & once they decide, they can shift the dynamics of our politics. Take note that the dominance of Kigezi has gone beyond it’s territory to Ankole, Toro, Bunyoro and Buganda. This is on account of their high fertility rate & migrations.
The Banyakigezi have got a strong Network that cuts across the country.
You will be surprised to find a bus like Kasamba coach moving from Hoima through Kagadi to Kasese and finally Kabale everyday or a vehicle moving from Kisoro through Mbarara to Kyegegwa and finally Mubende, there is no other group of Ugandans that has such a strong network.
So the candidature of Henry Banyenzakyi as an endorsement by Banyakigezi could cause a paralysis & a sharp divide in NRM.
Uganda unfortunately seems to be taking the direction of Kenyan politics of tribal or regional alliances. Museveni seems to be creating new alliances with Acholi, West Nile and Teso & because these regions suffered a lot they think it’s also their turn to eat.
Buganda is now in hands of NUP, It ia hard for any political group to wrestle it out of NUP. Being an urban setting with politics of excitement and emotions, the tribal sentiment & perceived or real marginalization of baganda will make people remain religiously attached to NUP.
On the other hand western region seems ready to lose Museveni if they are assured sustainability of their wealth. Muhozi cannot give them the assurance because he is unpopular & his assuming power would be an extension of Museveni hegemony.
The Northern & Eastern Uganda that would form a bargain in the transition seem to have messed their chance by endorsing Museveni, they cannot eat their cake and have it. They might collapse with him unless they re-abandon him.
So, since Muhozi is not popular yet NRM has destroyed all potential & credible leaders, it creates a power vacuum, the NRM progressive independent minded members could form a block which Hon Banyenzaki could represent.
A graduate of Social sciences, a masters in social sector planning management, & two diplomas, Banyenzaki has enough background to challenge the status quo in the NRM.
Banyenzaki’s 15 years record as an independent minded legislator who challenged the NRM excesses to the extent of calling him a rebel MP was an inspiration to many and was a great seed that he planted in our politics.
His membership & role in founding the Parliamentary Network forum for oil & gas, African Parliamentary Network on MDGs & later SDGs where he served as a secretary general between 2006-2016 makes him well placed in global issues.
Having served as a vice chair Budget Committee 2006-2008, chairperson Parliamentary Forum on world Bank & IMF 2006-2011, member of Presidential economic council 2011-2016, currently Board advisor East Africa- American Chamber of Commerce- Texas makes him appreciate the economic dynamics our country faces today.
His experience as a Minister for economic monitoring & later his roles in the Operation wealth creation program among others presents Banyenzaki as a credible person to stand for NRM chair. Whereas the NRM is dead, there are a few voices of reason & Banyenzaki is one.
His Kigezi background & politics of alliances gives him a task to convince his origin first. My discussions with him is that he believes that power should move from the NRA generation politics to a new generation. He also believes that it’s time to abandon militarization in politics.
Obviously, his appointment to serve in cabinet is a double edged sword, whereas it enriches his CV, it on the other hand puts to test his principles.
Whereas Banyenzaki’s candidature is good to challenge the democratic credentials of NRM, he does not have the needed machinery to change the status quo within, except to use this as an opportunity to position himself among the post Museveni NRM contenders, more so as a Challenger to Muhozi. He can even join a new political formation through which he can advance his cause.