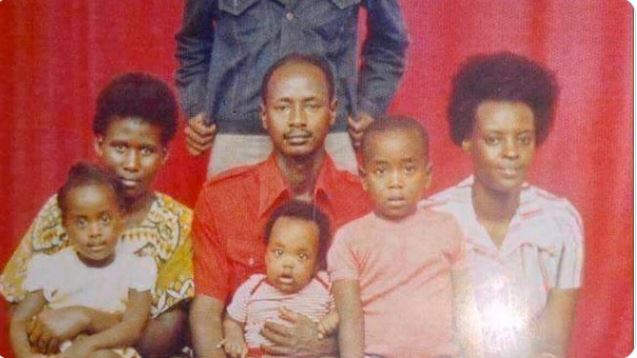 Lt. Gen. Muhoozi Kainerugaba,  who is the Presidential Advisor on Special Operations and the First Son, has scoffed to people who refer to him as ‘First Son’ and his  family members as ‘First Family’.

In a tweet he posted on Saturday,   Gen. Muhoozi assured the entire world that he laughs at people who refer to him  as ‘First Son’ and President Yoweri Museveni’s family members as ‘First Family’, because they were refugees before they became such.

Gen. Muhoozi  tweeted thus; “These days people like calling us ‘First everything’. We all just laugh when we hear that. Before we were anything, we were refugees in Tanzania and Kenya. Before my father and uncle fought for our country we were fugitives! May Almighty God continue to bless Uganda!”

The General accompanied the tweet with a photo of a then youthful Museveni holding  one of his daughters, as Muhoozi, then a toddler, stands besides Mama Janet Kataha, with  Gen. Caleb Akandwanaho aka Salim Saleh stands behind them.

It should be noted that despite being the First Son, Gen. Muhoozi is a down-to-earth who has always maintained an amiable demeanour and often freely interacts with Wanainchi whenever and wherever he gets an opportunity to do so.