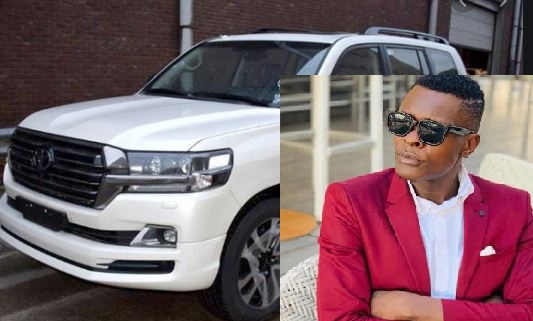 We have established that URA operatives cornered Chameleone at Mengo based BBS TV offices, where he had gone to perform for Kabaka Ronald Muwenda  Mutebi’s Easter party, which coincided with his 65th birthday.

However, moment he parked the vehicle, URA operatives surrounded it and  when he got out they asked him to produce tax clearance forms for  Land Cruiser but he didn’t not have  them.

Chameleone pleaded  with the URA operatives to let him first fulfill Kabaka’s  duties, after which he would drive  to his home  to get them the papers  they wanted.

However,  the URA operatives  are said to have let Chameleone go on with the performance, although that didn’t stop them from clamping the  vehicle.

By the time Chameleone returned to the parking lot there was no way he could away and instead had to mobilise for a  lift from a Good Samaritan  to drive him away from Mengo.

Our Sources at URA reveal that Chameleone has been driving the white Land Cruiser, which he drove  from South Sudan to Uganda in early 2019, for over a year now without  processing Ugandan number plates for it.

We are told the reason why Chameleone has since refused to process Ugandan number plates and all the necessary taxes for the vehicle is because the  entire process will require him to cough not less than Shs200m, which he currently doesn’t have.

But instead of making partial payments or  reaching an amicable understanding with URA, it is said that Chameleone has for a long time turned a deaf ear to constant reminders from the tax body about his obligations.

All efforts   for URA operatives to physically reach Chameleone and serve him demand notices had been futile because of elusiveness until on Easter Sunday when one brave URA operatives ‘sacrificed’ his Easter holiday and managed to corner him.