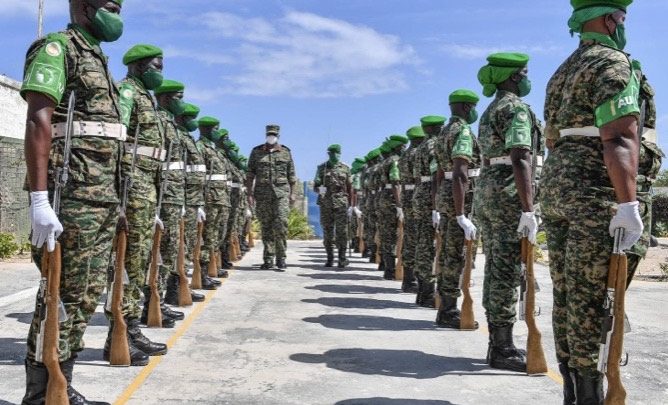 According to highly placed Military sources, the Generals are accused of swindling billions of money which were supposed to pay UPDF soldiers who went on war in Somalia.

UPDF sources say in September 2020, over 1800 soldiers under Battle Group 30 went on mission in Somalia under African Union to fight alshabab terrorists in Somalia.“We went to support veterans who were already in Somalia,” says one of the UPDF officers.

The officer says the soldiers were supposed to earn $ 628 totaling to shs 2.19m per month.

“We were only paid for six months only and our bosses told us that we shall receive the balance when we are in Uganda,” Another soldier reveals to us. He adds they have now spent over two years and they have not received any coin from UPDF. Whenever we ask our bosses our balance, they become harsh on us and threaten to arrest and prosecute us in Military Court Martial,”another Soldier adds.

Another officer who was in battle group 30 says when he inquired from bosses in Mbuya about the pending payments, he was told that the African Union had not sent the balance because they had no money.

“We paid the balance of Soldiers under battle group 30 to the Government of Uganda a long time ago and soldiers should now demand their pay to their Government that sent them to Somalia,” a source from the African Union says
The source says the African Union can not receive another Battle group when they have not paid the old Battle group. The affected officers want the President who is also the Commander In Chief to intervene and have their balance paid. “This is not the first time battle group commanders swindle officers’ balance but this round is beyond,” another high ranking officer says. He adds that battle group commanders normally eat the last three or two months of Soldiers Mission Money. However, Government of Uganda has revealed that it has not received mission allowances for the Uganda People’s Defence Forces (UPDF) troops deployed under African Union Mission in Somalia (AMISOM) since April 2021.

According to a statement issued by the (UPDF) Spokesperson Brig. Gen. Flavia Byekwaso, the alleged complaints by some soldiers of UGABAG 30 as reported by some sections of the media that their allowances were stolen by UPDF are baseless and unfortunate.
Brig Byekwaso said that the Government of Uganda and the Ministry of Defence and Veteran Affairs have established mechanisms with the Mission funders which is the African Union on how arrears for the forces deployed under AMISOM are always cleared.
Brig Byekwaso further clarified that the same processes and mechanisms are being followed to have the unpaid allowances cleared and urged all the affected troops to maintain discipline and patience since the process of settling their arrears is already on and they will certainly be paid.