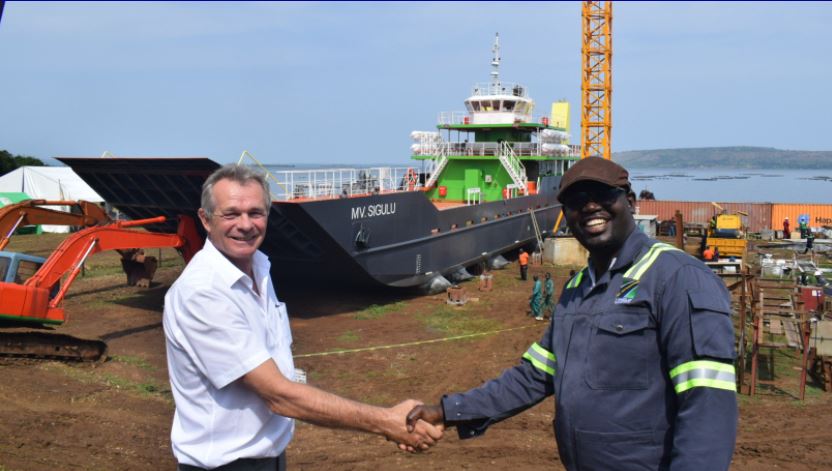 The Uganda National Roads Authority has unveiled a new modernized ferry which has been purchased by the government through the Ministry of Works and Transport in a bid to improve water transport in Eastern Uganda.

According to officials from UNRA, the new ferry called MV Sigulu, which is a 300-seater, will connect the islands of Lolwe and Sigulu to Namayingo District mainland.

The ferry, which is set to be commissioned soon, will be prying the following route as part the UNRA schedule;  Watega landing site (Namayingo mainland),  Bumalenge landing site (Sigulu island), and Kandege landing site  which connect Lolwe Island.

The ferry was built on site in JGH mobile shipbuilding site in Jinja and  completed in 2019, and underwent the approval phase this year which ended in April.

Now the ferry is fully in the hand of its owner, Uganda National Roads Authority and ready to pry the waters.

The 44 meter long MV Sigulu is planned to serve the Namayingo district in Uganda, from the mainland to the islands in Lake Victoria, hereunder the Sigulu Island and has capacity for 18 cars (or trucks, but then fewer) and 300 passenger with max speed of 10 knots.

The construction of the ferry took place at the shores of Lake Victoria in Jinja, Uganda under class supervision.

JGH looks forward to seeing the ferry serve the people of Uganda for a long period.

JGH is further proud to have trained and utilized a significant number of Ugandan workforce during the period.