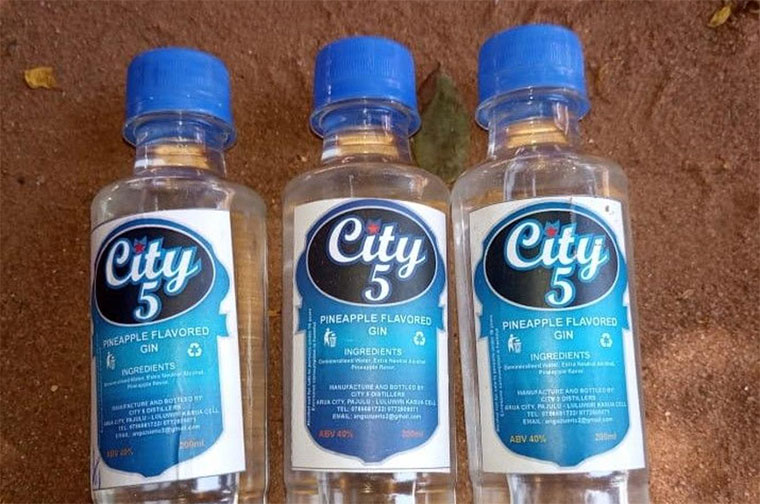 The Uganda National Bureau of Standards (UNBS), has banned the production and sale of City 5 gin, a locally distilled alcohol in Arua City, days after it reportedly claimed about 17 lives and left others hospitalized in West Nile.
The development was confirmed on Wednesday by the State Minister for Industry, David Bahati.
Bahati told Parliament that the Arua-based Luluwiri Fruit Wine factory, the producers of the adulterated gin was suspended until further notice.
The Bureau has sealed off and suspended the production facilities where the adulterated gin was found until further notice,” Bahati said during plenary sitting on Thursday.
He also revealed that the manufacturers of the ‘killer liquor’ are currently being detained by police.
“The suspects involved in the manufacture and sale of City 5 Gin have been arrested and are in custody of Uganda Police Force,” Bahati said.
The minister was updating the House on action taken by the Ministry of Trade, Industry and Cooperatives after the matter was first raised by Arua Central MP, Jackson Atima during the Tuesday, plenary sitting.
So far, 17 people have been reported dead after allegedly consuming City 5 Gin that is not certified by UNBS.
Of the deaths, six were registered in Arua city, five in Madi Okollo district and three in Arua district while others are still hospitalized in Arua Referral Hospital and other health facilities.
Bahati confirmed that upon subjecting the samples of City 5 Gin into a laboratory analysis, it was found that the gin was excessively adulterated with methanol which was far higher than the permissible level of 50 milligrams per litre.
“It is likely that the perpetrators deliberately and illegally used methanol as a cheaper alternative to increase the potency of the City 5 Gin instead of ethanol which is commonly used in making alcoholic beverages,” he said.
Methanol is an industrial chemical which is mostly used to make fuel.
It is commonly used for diluting wall paints and wood vanishes. Unlike ethanol, methanol is poisonous for human consumption.
Bahati said UNBS has also suspended the certification process of products from the suspected production facilities until further notice.

“The Bureau has placed advertisements on local radios in West Nile Region to caution people against consumption of City 5 Gin and other uncertified beverages,” Bahati said.