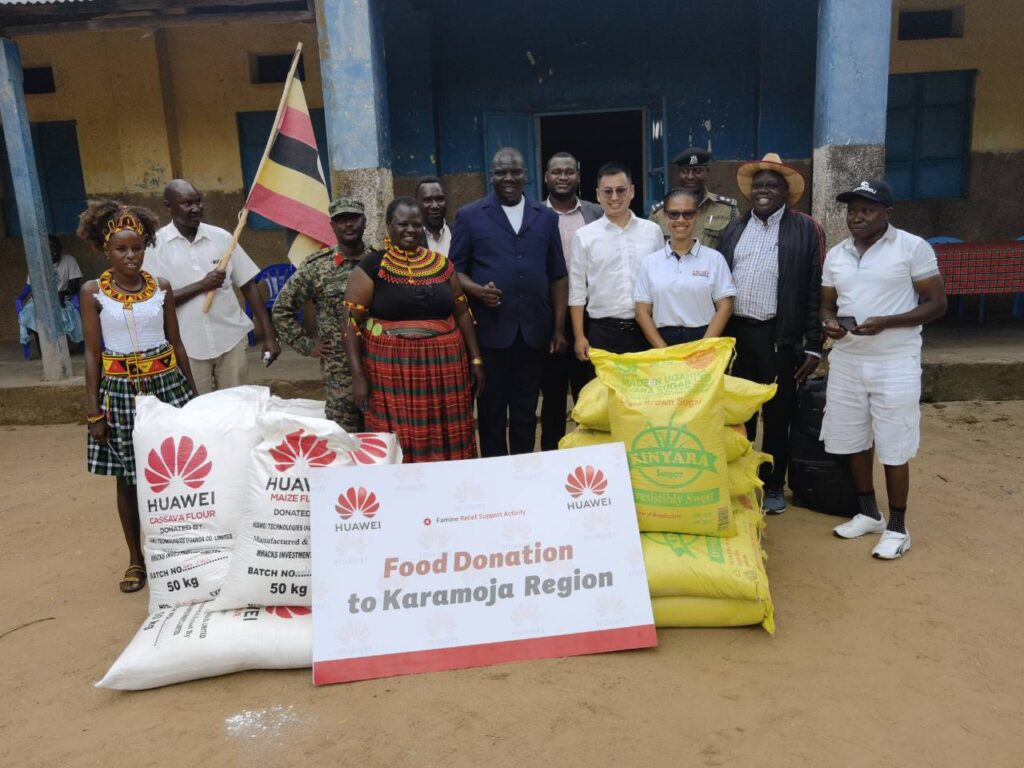 The First Lady and Minister of Education and Sports Mrs. Janet Museveni flagged off food worth 50,000 US dollars donated by Huawei Technologies Uganda for distribution to the people of Karamoja.
The food donation which has been delivered to different towns of Napak and Moroto districts, has generated a lot of positive reactions for the First Lady and tech giant Huawei for supporting the people of Karamoja who are struggling with famine.
Huawei Technologies Uganda made the pledge to the First Lady at the beginning of August and delivered the food to targeted groups including children, women and people living with disabilities this month.
Mrs. Janet Museveni thanked Huawei Technologies on behalf of the people of Karamoja for the food donation in this season when everyone knows that they badly need the food.
“We are very grateful that you could come in and hold hands with us and we thank you so much for what you have done”, she said. The consignment included over 12,000kgs of maize, 12,000kgs cassava flour and 10,000kg wheat flour, 5,000kgs of rice, 2,000 litres of cooking oil and 2900kgs of sugar respectively.
Hon Janet Museveni also appreciated Huawei for including Masuliita Children’s home in the beneficiaries.
“I appreciate Huawei for including Masulita Children’s Village in the beneficiaries. In collaboration with other stakeholders, we’re trying to get the street children off the streets of Kampala, and so they’re taken to Masulita where to get some skills to live by and become self-reliant.”
The food donations have enlisted good responses from the public.
“Well done Mama, may God keep showering the kind hearted with blessings,” said Enigma UG on Twitter.
“Thanks so much, people surely can’t develop without food security,” added Otatiina Nelson on Twitter.
The Minister of Karamoja Affairs Dr. Mary Goretti Kitutu attended the occasion at Masulita Children’s Village and called upon all Ugandans including MPs to condemn people who carry out child trafficking from Karamoja and exploit them for selfish interests.